Bezelless it was going to be, the first of its kind, but the Oppo R7 Plus didn't quite live to the promised edge-to-edge display. Yet, you'd be foolish to dismiss it on those grounds alone, as there's so more to a smartphone than the size of its frame.

So what if the ZTE Nubia Z9 actually has pixels spilled all the way to the sides, and the R7 Plus doesn't? Oppo's 6-inch phablet, positioned where midrange meets flagship, has a wonderful metal build and an appearance worthy of its top-shelf aspirations. 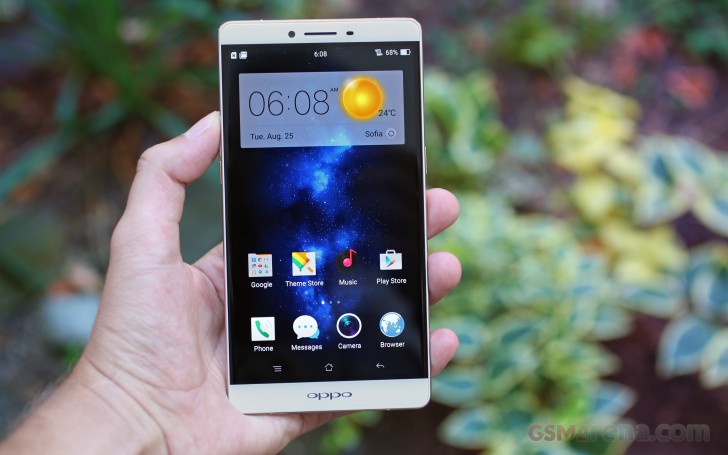 The smartphone does accomplish the bezelless look with the screen off, but fire it up and the illusion is shattered. Even so, the R7 Plus boasts an impressive screen-to-body ratio - and while you may think that's nothing but a catch phrase, it's arguably one of the more meaningful scores in today's numbers race.

We're yet to see someone disagree that battery life is something we just never seem to have enough of. Oppo has done its best and fitted a mammoth battery inside the R7 Plus, and also equipped it with the in-house fast charging tech, so it doesn't take a decade to fill up.

A flagship-grade chipset would have been most welcome, given the rest of the specs, but the R7 Plus makes do with Qualcomm's ubiquitous upper-midrange Snapdragon 615. So be it, it won't win performance awards but typically makes for a fine daily driver. The 3GB of RAM and a generous 32GB of expandable storage shouldn't leave you wanting either.

Oppo has taken a different path with the camera of the R7 Plus, compared to the regular R7. A Sony IMX278 sensor replaces the Samsung ISOCELL imager and the phase detection autofocus has made way to a laser mechanism, so we'll need to see how this new combo fares.

But first things first. Join us on the next page where we start with unboxing the Oppo R7 Plus.

How did you manage to update its os to android 10, coz mine is stock up with outdated os? Please reply.

Just upgrade to android 10 and still working good with my 3gb rom and 32 internal memory. So far so good....still happy with my phone