The Oppo R7 Plus comes in a standard-issue retail box. There's an AC adapter and a microUSB cable that support Oppo's proprietary VOOC fast charging tech and can deliver up to 4A at 5V for total of 20W of charging power. More on what this actually means in the battery section.

VOOC charger and bumper case spice up the basics

A headset is also included. There's a textured plastic bumper in the bundle as well, quite typical of Oppo packages.

The Oppo R7 Plus is a big smartphone, but you'd expect that, given its 6-inch display diagonal. It actually does a great job keeping dimensions within reason and measures 158 x 82 x 7.8mm. Spiritual brother Huawei Ascend Mate7 is a millimeter smaller in X and Y directions, but a is a fraction thicker. For reference, the iPhone 6 Plus is the same height with only a 5.5-inch display.

Weighing in at 192g, Oppo's 6-incher is 7g heavier than Huawei's but, at this end of the weight range, the difference is as good as none. That said, the 6-inch Nokia Lumia 1520 is both substantially heavier and larger in footprint and the just announced iPhone 6s Plus weighs the same despite having a smaller footprint and a half-inch smaller display.

It should be clear by now that the Oppo R7 Plus was meant to get noticed, not lay low. Its sheer size makes it conspicuous enough, but the Golden paintjob leaves nothing to chance. 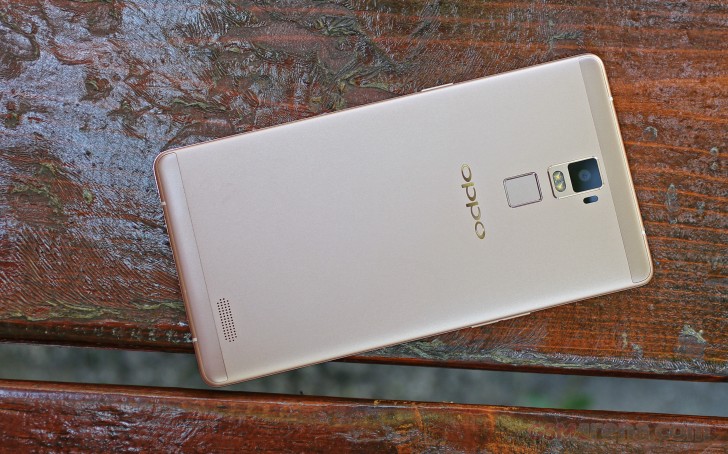 Oppo says the smartphone's body has been crafted from a single piece of magnesium-aluminum alloy. 48 polishing processes later, we have the smooth finish of the back and the outer frame, which are one-piece. There's a shallow groove chiseled out from the side, which adds a nice accent to the frame, but also collects dirt.

There's plenty to mention on the back, other than the exquisite finish of the cover. The least attractive part is the plastic inserts required by the antennas. They don't fit perfectly, sit below the surrounding surface and have uneven gaps.

The camera module is up top with a dual LED flash next to it. The assembly is ever so slightly raised, but the actual front element of the lens is recessed into it, so it should be safe from scratches. The laser autofocus is behind a tiny black window on the right.

Under the camera lens you'll find the fingerprint sensor, which is lowered as much as the camera is raised. The depth is just enough to offer tactile feedback as to the location of the sensor, so you can easily find it without looking, which you'd need to be doing most of the time, given its position on the rear.

Further down, a shiny company logo graces the back, etched into the back cover. All the way at the bottom is the back-firing speaker.

A lot of features on the back, color scheme wins points for style

The 6-inch screen pretty much owns the front. When it's off and you look at it head on, the display and the surrounding black frame blend together and the phone does indeed look bezelless. Glance at it from any other angle and the greenish tint that AMOLEDs exhibit when viewed from the side, reveals that the edge-to edge is nothing but an illusion. Good looking, nonetheless.

Front of the R7 Plus

There's the all-important 2.5D glass, gently curved towards the edges. It looks good, feels pleasant to touch, if you notice these kinds of things, and it's associated with premium smartphones.

Unlike the 5-inch R7, which comes with capacitive buttons in the bottom bezel, the Plus has the controls on the screen, thus allowing for a slimmer chin. With the space freed from function, Oppo found it a convenient spot to put its logo. The top bezel serves a lot more purpose with the earpiece in the center, joined on either side by the front camera and the bunch of sensors.

The power button is on the right site, and is located for comfortable reach with your right thumb or left index finger. Even so, you're unlikely to use it much, because fingerprint unlock works really well.

Above the power button you'll find the hybrid card slot, which can accommodate two nano-SIM cards, or a nano-SIM and a microSD card. The tray is made of metal and is pretty sturdy, too.

Power button and SIM card tray on the right

The left side features the volume rocker, which has been shaped to resemble two discrete buttons but is a rocker nonetheless. Both the volume controls and the power button are metal as well, fit snuggly in the frame cutouts and produce nicely solid clicks.

Volume rocker on the left side

The bottom has the microUSB port, which is upside down (the chamfers are on the bottom). Oppo's bundled cable is upside down too, though, meaning the VOOC logo still gets to be on top when charging. The mic pinhole is to the left of the USB port.

The top plate houses the 3.5mm headphone jack and the secondary mic.

microUSB port and primary mic on the bottom • 3.5mm jack and secondary mic up top

The R7 Plus is a 6-inch phablet and handles like one. Most of the interaction with it is done with both hands, though basic tasks like voice calls can be executed single-handedly. The buttons are all very-well placed and the fingerprint sensor on the back helps a lot.

Oppo R7 Plus in the hand

The texture of the finish on the back is very fine and doesn't offer too much traction. In fact, the glass on the front is grippier than the back. The included plastic bumper case improves things a lot, but we're not sure that the trade off in terms of looks is worth it.