Oppo's retail box customarily comes with everything you'd need and then some. You get a VOOC fast charger with a 5V/4A rating and a special USB cable that's needed for the delivery of all that power to the phone.

Retail package has you well covered

There's also a headset, and a clear plastic bumper cover, allowing you to show off that metal unibody, while keeping it ding-free.

Oppo's 5.5-incher is pleasantly (and premiumly) thin at 7mm, and while the outgoing A7 is 0.7mm thinner, next year's chief competitor from Samsung camp is still thicker with its 7.3mm waistline.

The R's in Oppo's lineup stand for above-average hardware built into top-shelf casings, and such is the... case with the R7s. Oppo takes pride in the craftsmanship of the R7s and rightfully so - the phone looks and feels as expensive as it actually is. 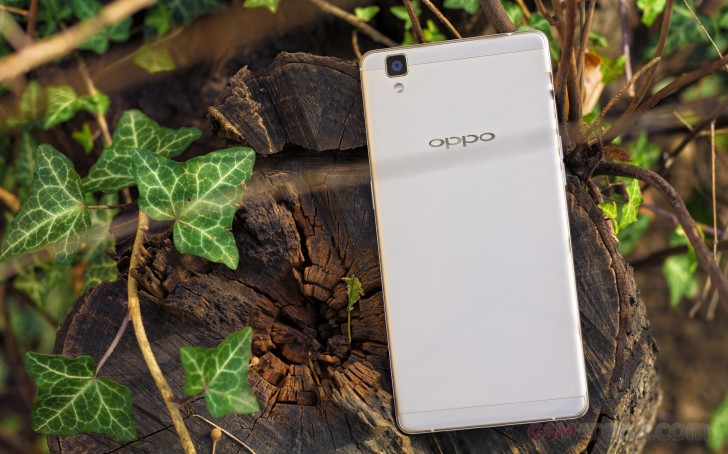 In terms of design it is, indeed, little more than a scaled up version of the original R7. In fact, looking at it from the back, with nothing to give you a sense of scale, there's practically nothing to set the two apart. Okay, unless you're the type that spots that the secondary mic pinhole has disappeared from the rear.

Aside from that, it's the same metal unibody with a sparkly finish on top, in Golden attire for our review unit. The antenna inserts are present too, and depending on your stance, they're either an eye sore or a nice accent. Oppo's logo is etched in the panel, revealing a reflective strip underneath in a different shade of golden, if that's even possible.

The camera is in the top left corner halfway into the antenna strip, and sticking out by a fraction of a millimeter. We'd guess Oppo tried to stay afar from any legal battles with another particular brand with a double-P in the name by making the camera window square. A single LED flash is right below the camera lens.

Unfortunately, what you won't find here (or anywhere on the device, for that matter), is a fingerprint sensor. The R7s' smaller size, compared to the R7 Plus, is hardly an argument - after all the 5.5-inch Huawei Mate S has one and it's every bit as convenient to use as it is on 6-inchers. It baffles us why Oppo chose to omit it, when it's becoming less of a headline and more of a given.

Flip the device over, and while the similarities with the R7 are inevitably there, the R7s is quickly revealed - there are no touch keys below the screen. It's Oppo's second device without those after the R7 Plus, and we suspect Oppo is set on abandoning them in favor of onscreen buttons, at least in the midrange to high-end models.

So the facade is a lot like the one of the R7 Plus. Only here the side bezels have been painted white, so when the display is off, there still is a side frame visible. The R7 Plus, on the other hand, aims for that bezelless look, though firing up its display quickly reveals that not to be the case. The R7s also differs from its bigger brother in top and bottom bezels - both the chin and forehead are noticeably taller.

The 2.5D arced edges of the glass, or however you decide to call them, are sure telltale sign of a premium device.

Above the display there's the earpiece slit with the ambient light and proximity sensors on the right and the front-facing camera on the left. Further to the left, there's the notification LED, only it doesn't get a cutout in the white layer, it just lights up through it.

The frame of sorts, which is actually a one-piece unit together with the rear cover, has the same groove all along as the R7, making it look like a discrete element. The left side is home to the volume rocker, while on the right you'll find the power button and the SIM card/microSD card slot.

The secondary mic has been relocated to the top plate, where it sits dead center. The 3.5mm jack is here as well. On the bottom there's the VOOC-enhanced microUSB port and a couple of meshes - left one for the speaker, right one for the primary mic.

In the hand the Oppo R7s is a pleasure to handle. It's thin, the buttons are comfortably positioned for use with either hand and the gentle curves around the edges of the display mean that swiping is simply a joy.

The Oppo R7s held in hand

On the other hand, the smartphone is quite slippery. Holding it securely shouldn't be an issue, but make a note not to leave it on sloping surfaces, as it will more than likely glide off onto the floor.