Oppo R7s set to be unveiled this month

The Oppo R7s smartphone, which was spotted at TENAA in September, will be unveiled this month. According to the Chinese company, the successor to the R7 will be introduced during this year's Gulf Information Technology Exhibition (GITEX), which is scheduled to take place in Dubai from October 18 to 22. 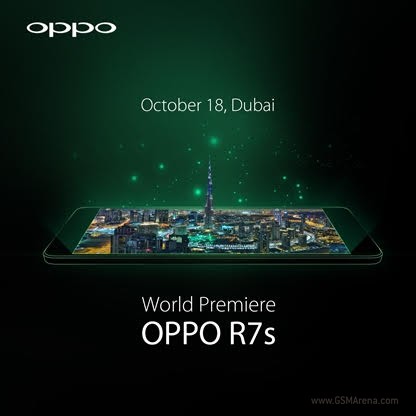 "The R7s will offer consumers a bigger battery, a larger screen and double the storage space of the R7, all the while boasting the full-metal unibody and stellar photo-taking capabilities of its predecessor," Oppo said in a press release.

From what is known till now, the handset will be powered by a Snapdragon 615 SoC with 1.5GHz CPU, and sport a 5.5-inch FullHD AMOLED display. It will come with 3GB RAM and 32GB expandable internal memory. In terms of camera, the device is expected to feature a 13MP/8MP combo, and run the latest Android 5.1.1 Lollipop.

Along with the R7s, Oppo will also showcase the R7 Plus, R7 Lite, Mirror 5, as well as the newly released R7 Plus FC Barcelona Edition at the event.

I just want the Find 9. But doesn't look that is going to happen.

Hey look, another huge phone. Meh. Weren't Oppo supposed to have a smaller device? If i wanted something that is bigger than 5" i'd just buy a tablet.