If we had to summarize the Reno2, we would have to go with - a well-rounded mid-ranger with a stand-out design, a sensible feature set, and a clear focus on cameras. Since that is pretty much the gold standard for any modern mid-ranger, it's worth elaborating a bit.

Experimentation in the smartphone realm is always great to see. Few players on the scene are big and confident enough to actually afford major experimentation. BBK Electronics - the parent company of Oppo, Vivo, and OnePlus - clearly has no shortage of resources, continuously funding innovative initiatives, live Vivo's NEX line, and, more recently, the Oppo Reno family.

The Reno line has only been around a few months now. Still, it has already gone through quite a few model iterations, and we've witnessed a lot of "soul-searching" along the way.

But ever since the original Reno and its shark fin selfie mechanism, the experimental spirit has definitely been a constant presence.

And the Reno2, which we get today, is the embodiment of the refined Reno formula. With this phone Oppo is zoning-in on what people appreciate about previous Reno phones.

The Reno2 seems to bridge the gap between the original Oppo Reno and the Reno 10x zoom rather nicely. Compared to its predecessor, the Reno2 is a clear upgrade in many minute ways. In no particular order, there is the souped-up and more power-efficient Snapdragon 730G chipset, paired with a bigger battery. The screen has grown ever so slightly as well almost entirely vertically, while still retaining the AMOLED tech and all the benefits that come with it, including the ability to include an under-display fingerprint reader. 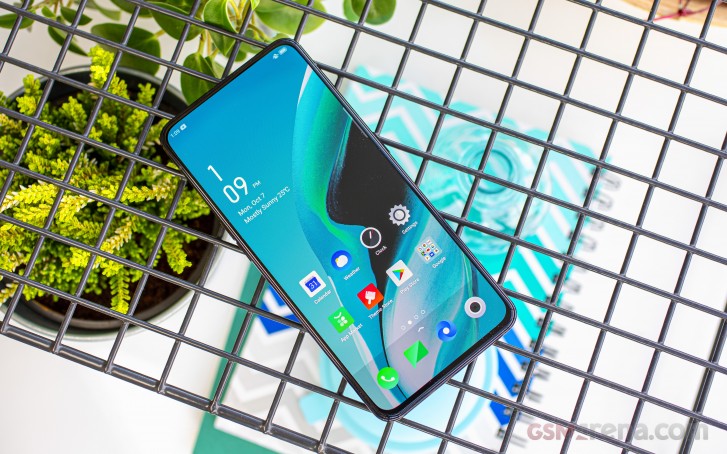 Then there is the camera upgrade - a clear effort on Oppo's part to tone-down the impressive camera setup on the Reno 10x zoom flagship, sacrificing as little as possible, while also keeping costs more reasonable. The result is a solid midranger with a mostly identical main camera, as well as telephoto and ultra-wide snappers. At least on paper, that is. Now all that remains to be seen is whether or not Oppo did its homework well enough to make the Reno2 a real popularity king. In the presence of all the capable Xiaomis and Huaweis out there, this is one daunting task.

Talking about a phone's retail package is always one of the least glamorous parts of a review, so to say. There's only so much you can say about a box with a smartphone inside. That being said, the one the Reno2 came in does stand out amid the pile we have at the office. It's nothing too flashy, really, nor over the top. We don't particularly appreciate when companies waste a ton of money on packaging. 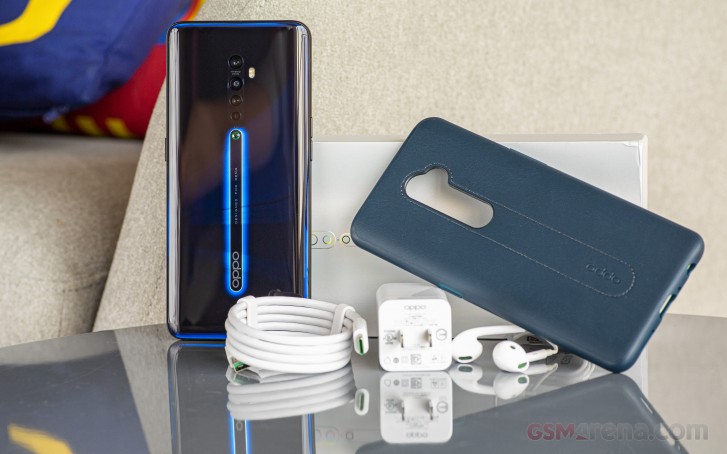 The box itself also stands out as it is unnaturally tall. Plus, it comes in this odd silver, metallic color.

The extra thick and resilient cardboard used for the box means it won't crunch even if you step on it. That, along with the plastic trays on the inside, earn it top marks for protection, while on the outside, you get a finish with a nice matte texture which feels premium to the touch.

We were also very pleased by the included accessory package. Starting from the wall adaptor, you get one that can deliver the full 20W of VOOC Flash Charge 3.0 to the phone.

As for extra goodies, you also get a pair of quite decent earbuds, which are somewhat Applesque in shape and color. And they end in a 3.5mm end since the Reno2 still provides us the good old jack.

Last, but not least, inside we find a high-quality case for the phone. It gives off a convincing impression of leather. But, more importantly, it covers all the right areas of the phone. This way you are all geared up to start using your shiny new phone without an extra trip to a store.

Yess you right ...i use it untill now

There is no FM radio on Reno 2.