Like we already mentioned, there is something to be said about the practicality of a more conventional flat display, uninterrupted by holes or notches. While not really special, the display on the Reno2 does tick these boxes. 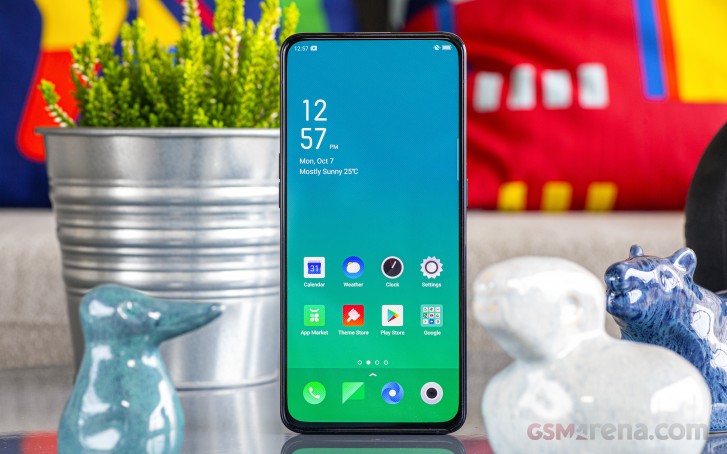 Don't misunderstand us either, the panel in question is pretty good all around. Size-wise it offers a small but still noticeable upgrade over the original Reno, bringing the Reno2 closer to the flagship Reno 10x zoom instead. Well, almost there, with a 6.5-inch diagonal. All of the extra pixels have been added in the vertical direction, which means the Reno2 isn't wider than its predecessor but does offer a wider and consequently trendier 20:9 aspect ratio. PPI-wise the two are very close as well. 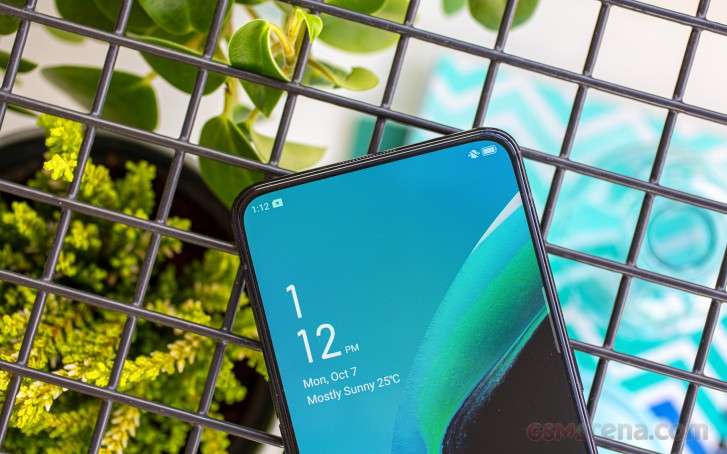 On the Reno2 it has a native resolution of a nice and round 1080 x 2400 pixels, which makes for a perfectly sharp 401ppi. No complaints there, especially if you still prefer to use on-screen navigation buttons. But even if you've moved on to gestures already, more vertical real estate is always welcome for the vertical, "scrolly" list nature of today's apps and web.

The phone comes with a pre-applied screen protector, which sits very nice and flush.

AMOLED is also great to see. As such, the panel on the Reno2 has true blacks and practically infinite contrast. 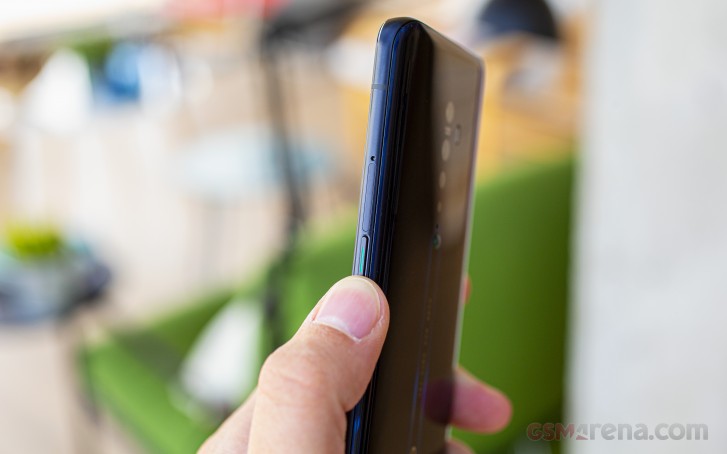 Brightness is also good, albeit not amazing on the Reno2. With a maximum of 509 nits and no max auto mode, it gets the job done outdoors, but direct sunlight is often a bit too much.

Color reproduction accuracy on the Reno2 is another satisfactory affair. The OS offers two color modes - gentle and vivid. The former is a bit more color accurate, with an average deltaE of 4.1 and a maximum of 9.6. The latter has the same max value, with the average rising up to 5.8. Neither of these is really horrible or anything, just not what can be considered color-accurate. In both cases, it's Point White that's mostly out of tune, leaning to bluish. Since there is no manual white point adjustment available, you might as well use vivid for those extra punchy AMOLED colors and be done with color accuracy.

Oppo managed to cram slightly more battery inside the second-generation Reno phone. The difference isn't that big - it's 4,000mAh up from 3,765mAh on the regular Reno. This is also practically the same capacity as the flagship Reno 10x zoom's oddly specific 4,065 mAh. This has come at the expense of a slightly bulkier 9.5mm thick body and a few extra grams of weight.

But aside from having more juice at its disposal, the Reno2 has a better ace up its sleeve still - the Snapdragon 730G chipset. That "G" suffix will come into play a bit later when analysing benchmark performance. As far as battery endurance is concerned, the important bit is the efficient 8nm development process Qualcomm uses for this particular silicon. And since this is a mid-range chip we are talking about, most of that extra thermal and power headroom has gone into optimizing power consumption over, say, the Snapdragon 710 inside the original Oppo Reno. 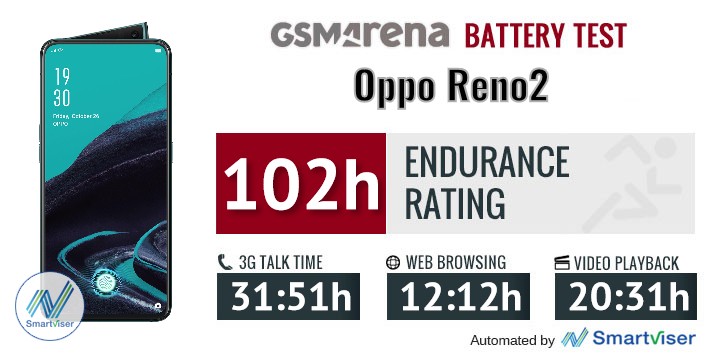 The Reno2 scored pretty high in out standard battery endurance run. And since we are going to be bringing up the Xiaomi Mi 9T quite often while talking about the Reno2, we might as well mention it and its regular Snapdragon 730, similar display and battery size. The two are expectedly pretty comparable in terms of battery endurance.

This is good to see since the Snapdragon 730 is still rather rare and the tweaked 730G variant even more so. This score proves that whatever Qualcomm did to the chip did not have a negative impact on its power consumption. Well, the Reno did manage slightly lower standby and talk times than the Mi 9T, but not by a significant amount. Perhaps the Xiaomi has slightly better antenna design. On the flip side, Oppo's software appears to be better optimized for certain on-screen tasks. At least it seems that way since it lasted longer both while playing a video offline and web browsing on Wi-Fi.

Charging-wise, the 20W VOOC Flash Charging unsurprisingly puts on a pretty strong show, getting the Reno2 from 0% to a little over 40% in about 30 minutes. A full charge takes about 85 minutes. This is noticeably speedier than your typical Quick Charge and its 18W max rating.

The Reno2 only has a single bottom-firing speaker in its arsenal. The earpiece does not double as a speaker for stereo output, which is kind of a bummer. On the flip side, the single speaker on the Reno2 does sound pretty crisp and remains distortion-free even while blasting at high volume. The volume itself falls shy of great but does still clear the bar into Very Good territory. The sound stage isn't all that impressive or anything, but at least you don't get nasty, screechy tones out of it.

The Oppo Reno2 did alright when hooked to an active amplifier, delivering the expected perfect accuracy of its audio output and above-average loudness.

Headphones caused a pronounced increase in stereo crosstalk and dropped the volume to below average. Some intermodulation distortion also appeared, adding up to an unremarkable overall performance. It should still do fine for the less demanding users, mind you.