Oppo introduced three Reno2 smartphones in late August, but none of them were a true flagship specs-wise. At the end of the event the company VP Brian Shen actually revealed a new phone is incoming, called Reno Ace. Today, the Weibo account of the phone maker confirmed the device, revealing its launch date - October 10. 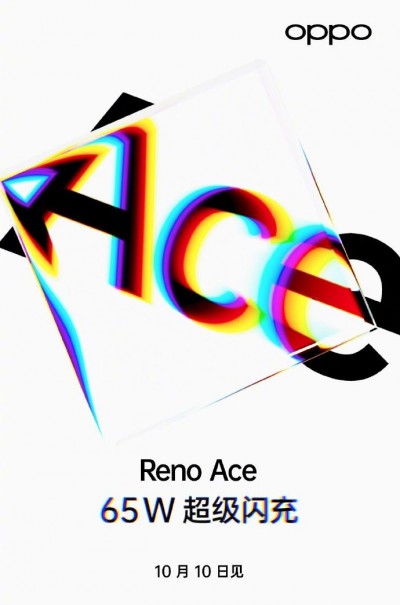 The Oppo Reno Ace will have 65W fast-charging capabilities, which is 30% more than the current 50W SuperVOOC. This should mean a new name of the standard, something equally spectacular like MegaVOOC, although a simple SuperVOOC 2.0 would also do the job.

Other specs are yet to appear, but Shen already teased some features like a 4,000 mAh battery and a screen with 90 Hz refresh rate, which most likely belong to the upcoming Reno Ace.

We expect to see a Snapdragon 855 Plus chipset, making the Ace an upgrade over the Reno 10x zoom and the Reno 5G, the only two devices of the lineup currently having a SD855 ticking inside.

Huh? If this is going to be the successor of the 10x Zoom it better comes with microSD slot and NFC, since the 10x Zoom has those two but not the 3.5mm jack.

Only in the most expensive models. Those that doesn't received the $50 charger cut in its price and lost the Touch 3D too.

And the batteries are smaller than others, so it should be fine now.