The design and the build quality is worthy of a flagship device featuring aluminum side frame and glass panels on the front and back. Of course, the design is a more subjective matter but you can't overlook the super slim bezels and the gorgeous gradient color on the back. Still, we can't shake off the feeling that this is a OnePlus 6T with fancy colors. 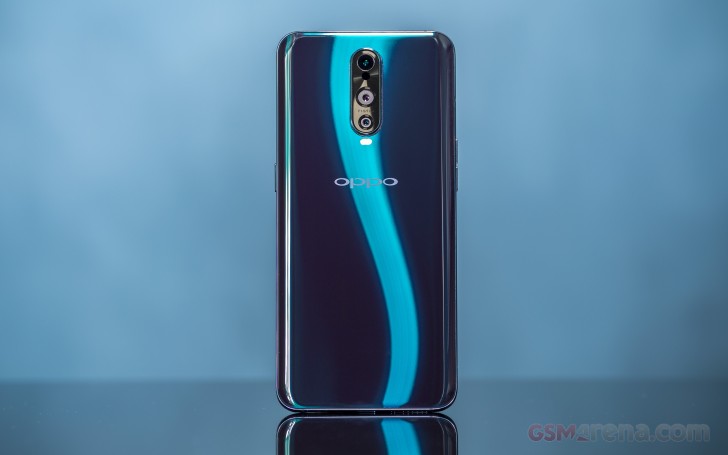 Starting with the sides, we see the volume rocker on the left and the power button on the right. They have clicky tactile feedback to them but we also noticed some unpleasant wobble from the volume keys. It's not something that gets in the way of using the phone but we felt the need to share.

Moving on to the top side of the frame where the noise canceling microphone is located while the bottom accommodates the hybrid SIM slot, the second microphone and the loudspeaker grill. The USB-C charging port is right in the middle and according to Oppo, it's a USB 3.1 (Gen 1) connector supporting transfer speeds of up to 5Gbps. However, the read/write speeds of the internal storage will be a bottleneck here. 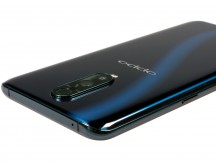 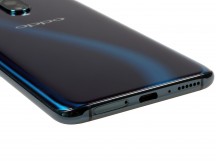 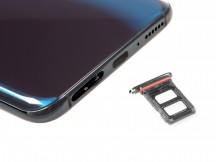 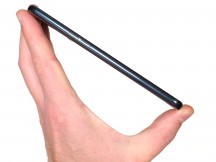 We've noticed that the SIM/microSD card tray has a red watertight seal despite the handset not being waterproofed. Perhaps it will withstand splashes like the OnePlus 6 and 6T. 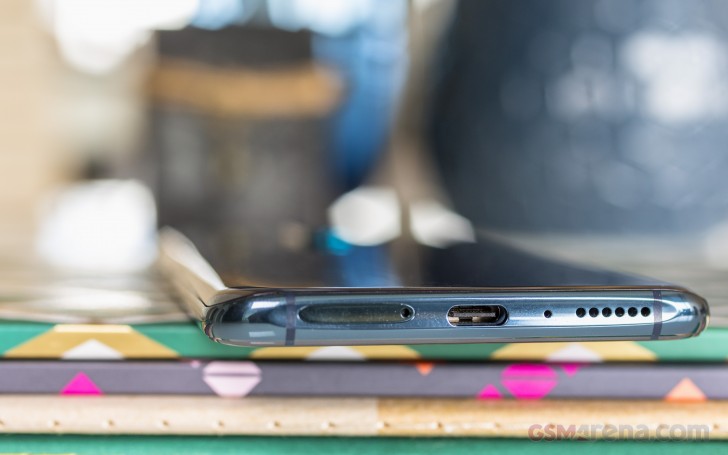 And while we are on the frame, it's hard not to complain about the protruding edges around the screen. While the glass back connects to the side frames seamlessly, the front glass panel appears to form a sharp edge with the frame where they meet. It's rather unpleasant when holding the device and unfortunately, doesn't help with the grip at all. 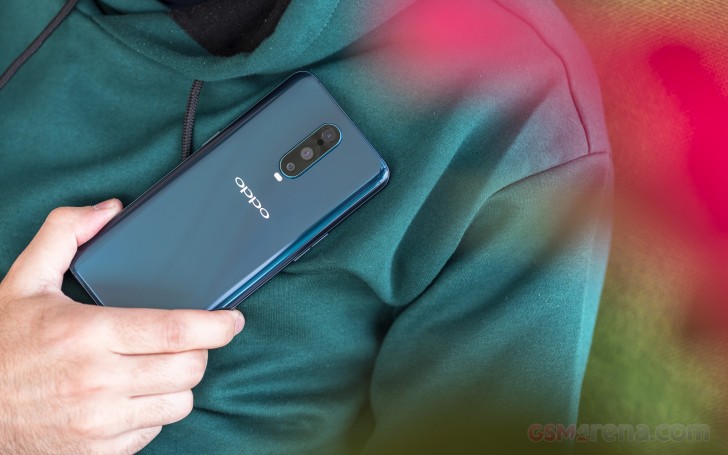 Speaking of the grip, we've noticed that the Radiant Mist's matte finish helps with the grip to some extent while the Emerald Green model that we have with us feels like it's buttered. It's super slippery and fingerprints stick easily. Also, the protruding camera module elevates the phone and wobbles quite a bit when placed on its back. 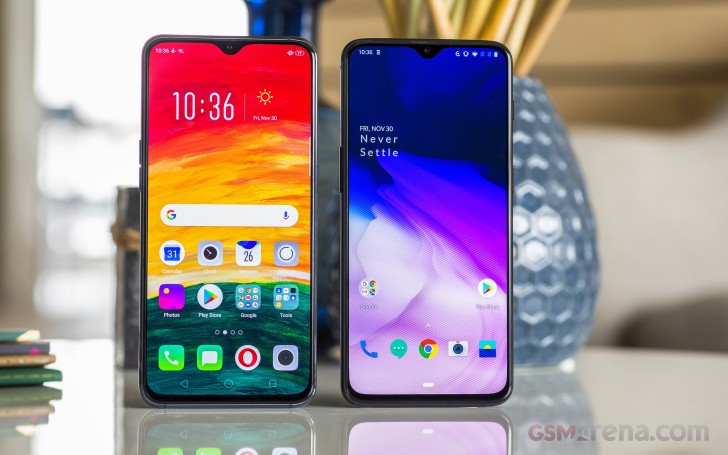 And now, a few words about the front. Whether you like the notch or not, you can't deny that the droplet-style cutout that Oppo has been using for its phones is less intrusive. It doesn't take away too much from the screen and looks pretty simplistic. Oppo has managed to cram up all the needed sensors in there including the front-facing one but unfortunately, the LED notification light has been left out. 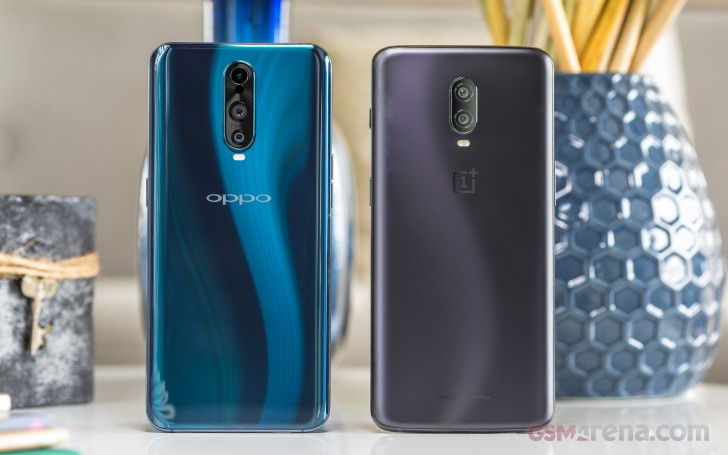 Arguably the most impressive thing about the front design is the slim bezels - and we even mean the top bezel and the chin. Only a handful of smartphones boast such slim bezels and the iPhone XS and XS Max are among them.

This leaves us only with the in-display fingerprint reader. It's a neat feature to have but the question still stands - is it any good in terms of performance and reliability? Well, the answers are still no. Don't get us wrong, some users who prefer the readers on the front than on the back will greatly appreciate the new tech but don't expect the reliability of a conventional scanner. 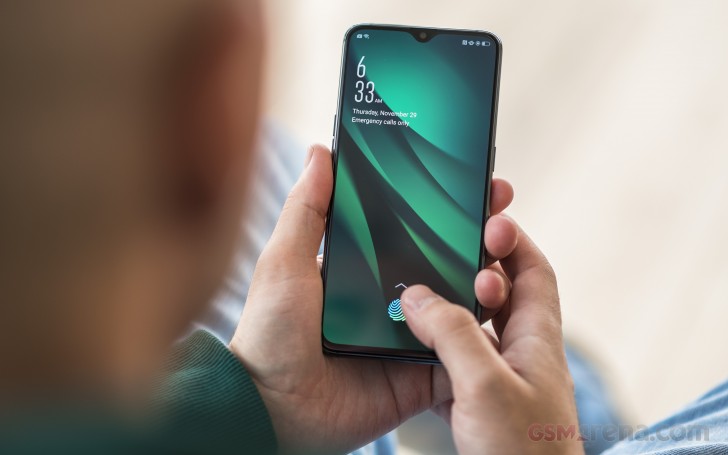 The scanner here often couldn't read the fingerprint and prompted us to type in the PIN code instead. And it's not an inherent issue of the technology that's to blame. The OnePlus 6T has a much a better implementation of the same Goodix optical fingerprint sensor. Side by side, the OnePlus 6T performs noticeably better than the RX17 Pro which leads us to believe that it's all in the software. 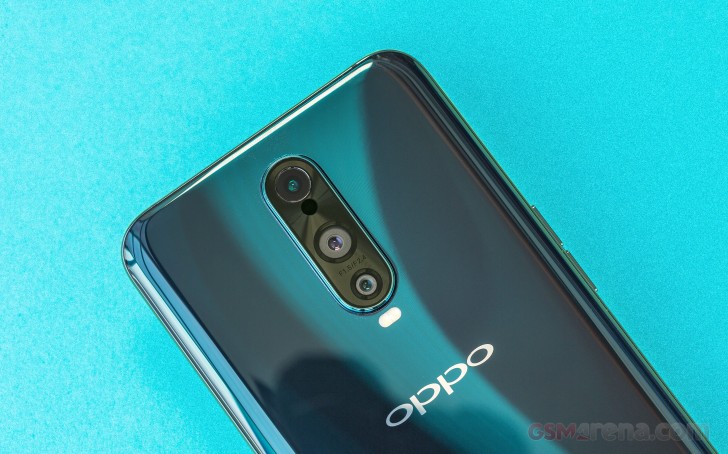 Additionally, when the phone is in power saver mode, the fingerprint sensor works with degraded performance and when you add more than two fingerprints, the performance deteriorates even further. We found that pressing with your finger just a little helps with the reading.

Still, for the less pretentious user, the fingerprint reader should perform just fine. And besides, the lift-to-wake-up feature works flawlessly and the face detection is so fast that the phone unlocks before you even reach for the reader. But more on that later. 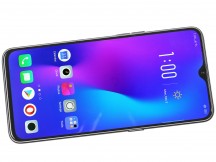 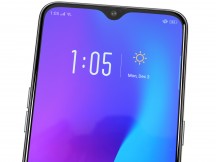 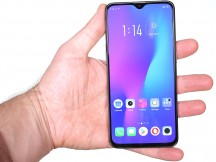 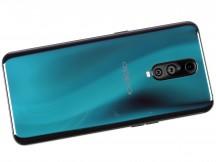 Oppo R17 Pro's front and back

At the end of the day, the Oppo R17 Pro is a well-built device with little to no complaints about the quality and the design. The only few things that stand out are the exceptionally slippery back and the sharp edges around the screen. But the slim bezels and gorgeous gradient back make up for these flaws. Moreover, ergonomics-wise, the phone feels pretty easy to handle considering the massive 6.4-inch screen.