The next big thing in mobile displays seems to be high refresh rates. Oppo VP Brian Shen took to Weibo to tease a 90Hz display for the next Oppo Reno phone, which will also support Super VOOC charging.

Oppo announced three Reno2 phones last week, but they were mid-rangers using the standard 20W VOOC. Notably, there was no successor to the Oppo Reno 10x zoom. This new Reno with its 90Hz screen and Super VOOC sounds premium enough to be a successor to the 10x.

ZTE’s nubia sub-brand has a head start. It's teasing the Red Magic 3S, which will have a 90Hz display just like the Red Magic 3. The 3S is coming in less than four days - it will be unveiled on September 5. 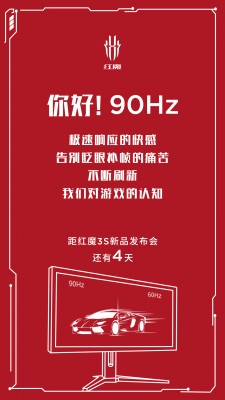 What about samsung? They still play safe.

well, this is the positive step though- making it more available to maisntream devices to eventually make the technology affordable. i am not a gamer myself and the initial reason i got the razer phone 1 and 2 was the speakers; but once i started usi...