AnTuTu has discovered the first results from an Exynos 1080-powered phone in its database. This 5nm chip was briefly mentioned by a Samsung exec, but is yet to be fully revealed so this discovery fills in some important details. 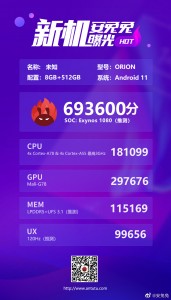 The GPU is a Mali-G78 as expected, but we still don’t know the core count. An estimate of “plenty” sounds about right as the graphics sub-benchmark shows a score close to 300,000. That trounces even the ROG Phone by quite a margin.

We haven’t seen what the upcoming Snapdragon 875 can do, but we can expect a similar year over year boost. This means that the Exynos 1080 should perform very close to 2021 flagships, especially in terms of graphics. And this isn’t even Samsung’s top chip for next year (that would be the Exynos 2100). The 1080 is meant for premium phones and rumor has it that the vivo X60 will be the first to use it. However, this benchmark score is lacking a brand name, it only reveals the code name – “Orion”.

If AnTuTu isn't for IPhone,, Geekbench is not for Android