Our voting system gets its long-awaited overhaul

Ever since its inception, our voting system has been subjected to relentless abuse from fanboys who give unrealistic votes to their most-hated and most-loved devices and thus rendering the overall score useless.

We tried various policies that attempt to put a stop to this, including bans and filtering of extreme votes, but none of that helped against people with access to proxy servers and plenty of free time.

Back in April, we asked you to help us improve our voting system. We were overwhelmed by your response, and from the sheer amount of comments we found that many people find our voting system important, even if flawed. After reading through your comments carefully, we've taken it upon ourselves to make it a truly useful aspect of our site.

Voting will now be restricted to logged-in users only. Over the past several weeks, we've implemented several changes to how you interact with GSMArena, and one of these is the ability to log in with your Google or Facebook accounts.

Since the back-end authentication for either of these log-in methods is done by Facebook or Google, we don't store any of your data and using either service is completely risk-free for you.

From now on you will be allowed to vote only once per phone. Voting again for a given phone will simply overwrite your previous rating, so you can still change your mind as many times as you like. 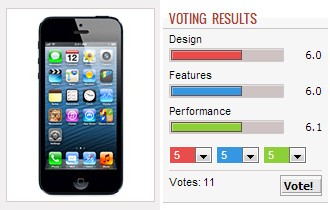 To maximize the effect of our new system, all of our current phones have also been reset to having 10 votes apiece. This means that while the current ratings are all still the same, future votes will have a significant impact on the scores.

For now, we're allowing you to vote on as many devices from our database as you want, but that may change if we see too many fraudulent votes. We encourage you to avoid extreme votes such as all 10's or all 1's, as our new moderation system is especially sensitive in that regard.

We hope that this new system will make voting the experience we initially envisioned it would be – a way to identify truly amazing mobile technology, as rated by the people who use it every day. So, if there's a device you're familiar with, get out there and let everyone know what you think of it!

If you have any problems with the new voting system, please let us know in the comments.

Still not unrealistic and effective.

Voting for a phone should end six months after its release date because after six months the technology used becomes obsolete upto a certain extent,people will give it a much poorer score thus not reflecting the phones true impact upon release for e...