Smart mobile device shipments for Q1 of this year have reached a record 308.7 million units, according to the latest report by Canalys. The number represents a growth of 37.4% compared to Q1 2012. 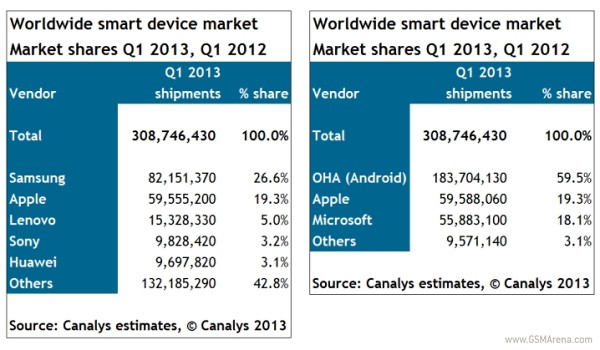 As is usually the case, Android has the lion's share of the market, with some 59.5% of devices being part of Google's Open Handset Alliance. Apple and Microsoft follow with 19.3% and 18.1%, respectively.

Globally, tablet shipments have taken the largest leap, with some 41.9 million units shipped - a whooping 106.1% annual increase. Apple continues to lead with a 46.4% market share, but it lost more ground to Android and things are getting closer.

In the smartphone realm, Android controls some 75.6% of the market, with Samsung being the major contributor to that cause, and growing by some 64.3% year-on-year. Apple saw its lowest annual growth since the release of the original iPhone in 2007 - just 6.7%. Canalys attributes this to the now-dated software of the iPhone, which is badly in need of a refresh.

Finally, Android's impact can be felt in the Notebook PC realm as well, where shipments have gone down by 13.1% compared to last year. ARM-based chipsets are forcing traditional heavyweights like Microsoft and Intel to retail their devices at lower price points if they hope to remain competitive.

Did you read the notes below the chart? It says their the data are preliminary and subjected to change. Cry lg fans, of flops.