OxygenOS 9.0.2 is rolling out to the OnePlus 6 with Nightscape and Studio Lighting

At the OnePlus 6T launch it was announced that its predecessor would get the Nightscape camera mode as well, this week even. And sure enough, a couple of days ago this was made available through a beta release.

Now, just two days later, the stable update is already hitting OnePlus 6 units in the wild. It's labeled OxygenOS 9.0.2, and aside from the new camera mode it also packs some other goodies. 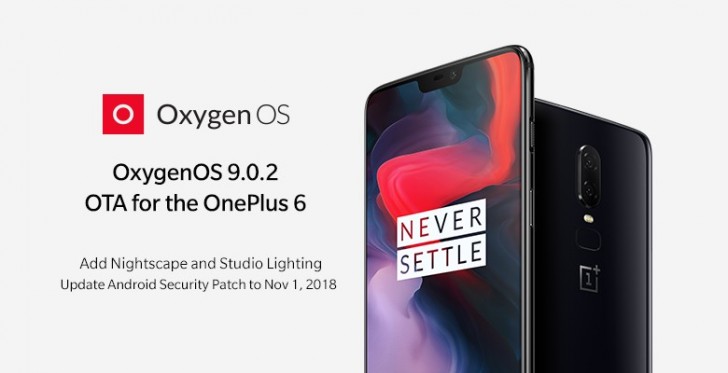 You get the new navigation gestures that debuted on the 6T, the improved UI for the About phone section in Settings, optimized standby power consumption, as well as the November 2018 security patches. You can also launch Google Assistant (or another third party assistant) by holding the power button for 0.5 seconds - and this comes in real handy if you use the OnePlus gesture navigation system, since it removes the navigation bar altogether and with it any sort of quick non-voice access to the Google Assistant.

Of course general bug fixes and improvements are baked in too, and the camera also has Studio Lighting to enhance face contour now. All in all, we'd say this is a pretty significant update which you should install as soon as possible.

Speaking of that, as usual this is going to be a staged rollout. The OTA will be received by a limited number of users today and will get a broader rollout in a few days after the company makes sure there are no critical bugs.

Improved battery, in display fingerprint sensor, beautiful screen , water drop notch, and no headphone jack(why though).... no change in camera module and processor but the storage of base model is increased. At least for some people, this phone seem...