LTE on a budget

The retail package is worthy of the price tag

Inside the compact box of the Pantech Burst, you will find nothing but a microUSB cable and a funky looking charger - hardly a surprise given the price tag of the smartphone.

It is much easier to excuse the Pantech Burst for lacking a pair of headphones in its retail box. After all, it costs a mere $50. We must point out however, that most AT&T retail packages we've run into lately, look this way.

Let's face it - the Pantech Burst is hardly a memorable achievement in terms of design. This is particularly evident at the device's front - all you are going to see there is an AT&T logo. There is absolutely no sense of brand identity incorporated into the device - a clear indication that Pantech are relatively new to the Android party in the United States.

The smartphone is available in two color schemes - black and red. This should help it appeal to a broad range of potential consumers.

Build quality is solid for a device, which costs only $50. High quality plastic is the predominant material used in the making of the Pantech Burst. Gorilla Glass is not present on the device, but we can hardly expect it at this price point.

The Pantech Burst is an extremely pocket friendly smartphone. Its measures are 126.5 x 62.5 x 11.4 mm, while its weight tips the scale at 122 grams. The pocketability can be attributed mostly to the small-ish 4" screen of the smartphone.

Speaking of the screen, in the case of the Pantech Burst it is a 4" Super AMOLED unit with WVGA resolution and a pixel density of 233ppi. Contrast and viewing angles are great, as is the case with all Super AMOLEDs. Our only grievance here is the PenTile matrix of the handset's display. Because of its presence, you can see the actual pixels on the device's display, despite its respectable density. We had to remind ourselves about the price of the device once again here.

The Super AMOLED screen's only letdown is its PenTile matrix

Above the screen, you will find the earpiece, ambient light and proximity sensors, as well as the front-facing camera. Below it are four touch-sensitive buttons - just like in any other Android smartphone on sale in the United States.

The volume rocker can be found on the left side of the Pantech Burst. The microUSB port, which is also used for charging is on the right.

The 3.5mm audio jack and the power/lock key are located on top of the device. The mouthpiece is on the bottom.

There are no surprises on the handset's top and bottom

On the back of the smartphone is where the 5MP camera and LED flash reside. The speaker and a secondary microphone keep them company. A relatively large Pantech logo and a latch for removing the battery cover complete the picture.

The back of the Pantech Burst is rather busy

Under the battery cover is where the microSIM and microSD card slots are found. Both cards are not hot swappable - you need to remove the battery before you can take any of those out.

The microSIM and microSD card slots under the battery cover

The 1650mAh battery is not among the strongest features of the Pantech Burst. The smartphone managed a score of 31 in our battery test. This means that you will need to recharge your phone every 31 hours if you use it for an hour each of telephony, web browsing, and video playback every day. 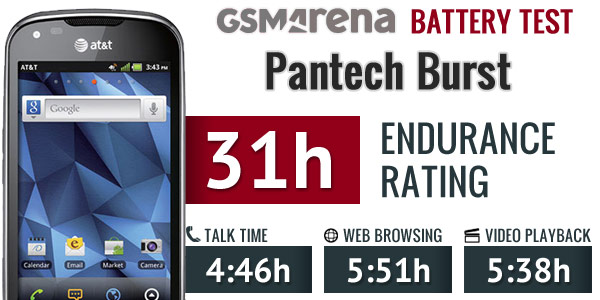 Keep in mind that our web browsing test is conducted over a Wi-Fi connection. Expect the LTE network to be even more taxing on the device.

You can find out all about the handset's battery test results here.

The Pantech Burst is an extremely easy smartphone to handle. Its 4" display allows the device to be operated even with one hand, without compromising too much on the screen real estate - a rare occurrence in the Android realm lately.

Handling the Pantech Burst is a breeze

The Pantech Burst is far from being perfect as far as design and build quality are concerned, but this is excusable given the low price tag of the device. It is what's inside the smartphone that matters most here.

It is now time for a closer look at the smartphone's performance and software. Don't be surprised if you come out rather impressed afterwards.