The Nokia brand is slated to return to the phone market this year with feature phone offerings from FIH Mobile and at least two smartphones by HMD in Q2 next year. Could this be one of them? A post on Weibo alleges to show the metal back of an unnamed Nokia handset. And with size reference we can say for sure this isnt the 13.8 Nokia D1C tablet.

The metal back of an upcoming Nokia phone (allegedly)

Little is known about the phone, but the metal back piece seems to match these renders that show a completed device. The renders show that the two holes are for a camera and a flash. There are two card trays on the left, a USB Type-C (probably) port on the bottom and a 3.5mm headphone jack. Of course, the author of these renders may have taken artistic license. 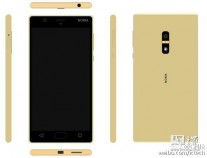 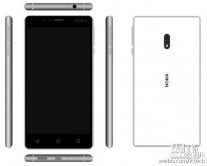 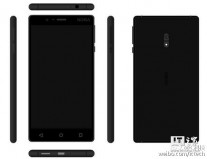 Renders of that same phone: Gold (with fingerprint reader)  White and gold (no fingerprint)

There are three colors: Gold, White and Black. Notice how only the Gold one has a physical Home button (and reportedly a fingerprint reader). This points to two separate versions - regular and Pro maybe? Concrete specs are unknown at the moment - the D1C runs Android 7.0 Nougat so the phones should too, but we hope they avoid the tablets low-end Snapdragon 430 chipset.

i 'm still waiting for buy nokia new mid range smartphonne .......i think if nokia give good quality camera,bettery, and 3 gb of ram...they can be sale...lots of nokia smartphone . and pepole can buy there best wanted nokia smartphone.thanks

xperia x series was just launched this, also iphone 6, samsung GS7, so how come you could judge this one will be 2 years life span. I have xperia live with walkman bought on 2011 and still works today and i give to my nephew....:p

No fingerprint... it sucks big time