While the rumor mill is trying to pinpoint when the announcement of Nokia's upcoming Windows Phone 8 devices will be, now a couple of photos surfaced showing what one of the smartphones may look like.

The phone is clearly sticking to the Lumia design guidelines and size-wise seems to be close to the Lumia 900. Unlike the 900 however, the screen edges are beveled (like on the 800), the Nokia logo is to the right (and not centered), the phone is yellow (not available on the 900) and, of course, there's the brand new homescreen. 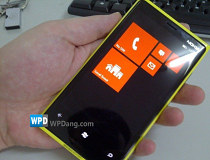 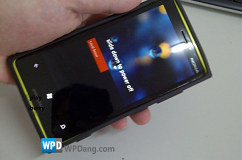 There are a couple of red flags though. For one, Windows Phone 7.8 uses the same homescreen, so it's not a clear enough indication that we're seeing a WP8 device. Another one is the file names of the images uploaded on WPDang (the site that broke the news): "Lumia-900-prototype_1.jpg" and "Lumia-900-Fake-prototype_2.jpg". We don't know if the WPDong admins are the ones that named the files or if it's the user, Playberry, who first posted them.

We have our doubts these photos show an actual WP8 prototype by Nokia, but if the rumors are true we only have to wait until Nokia World to find out (it starts in a month)

Thanks for the tip, Fakhre!

are you nuts. Windows Phone currently sucks. I doubt that WP8 will improve matters on the real important things like: FULL bluetooth transfer, 2-way call recording, USB/BT local syncing etc... You should be lucky if you can finally change sms-rington...

let the silky windows 8 show its potential.it is definitely better than the resource hungry android.lets see what it has got in store for ios!