Photos of Nokia E6-00 leak, does it have a touchscreen or not?

The Nokia E6-00 has been laying low for almost a month but it resurfaced with the first photos of the device. The photos confirm the QWERTY bar form factor and the camera resolution but don't give us much more.

The Nokia E6-00 leaked a while ago through an XML and some sample photos on Picasa. Curiously, the XML reported Symbian^3 for the E6-00 with a VGA screen (all Symbian^3 phones so far have nHD resolution).

The camera is an 8MP unit with dual-LED flash. The question of autofocus is open, it could be the same fixed-focus unit as the E7/C7/C6-01 trio. The Nokia E6-00 has a video-call camera, 3G connectivity and most likely Wi-Fi too. The stereo speakers from the first leak didn't pan out.

The question of Symbian^3 remains though - we've seen Nokia's Touch and Type line, which combines a touchscreen with a regular keyboard. The Nokia E6-00 could be Symbian's Touch and Type.

Normally, we'd be wary of such rumors but check out the photo of the back of the E6-00, just below the traditional Eseries volume rocker/voice command key setup. It looks like the Lock slider on touch-enabled Nokias, doesn't it? 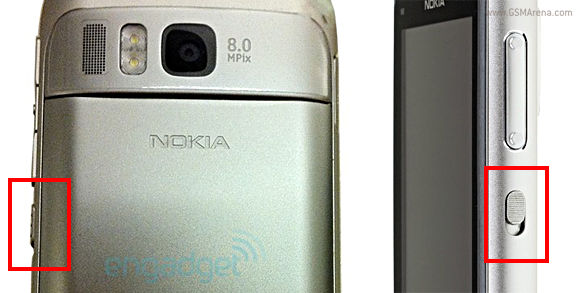 It's very likely that we'll see the Nokia E6-00 at the impending MWC 2011, which starts next week (or even earlier) - and our questions will be answered.