Samsung has been quite busy expanding the palette of available colors for its Galaxy S III flagship. Only three weeks ago it announced four new versions of the quad-core smartphone will be making their ways to the shelves and now we learn of a new fifth one.

The Samsung Galaxy S III will be hitting Korean shelves in pink next week. This brings the total number of choices for the color of the smartphone to seven, after the initially available Marble White and Pebble Blue and the four new versions from the end of last month (Amber Brown, Garnet Red, Sapphire Black and Titanium Grey). 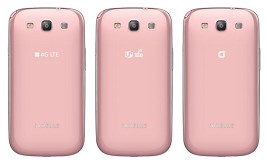 Naturally, availability of the individual colors will vary by region, and we haven't received confirmation yet that the Pink units will be leaving Korea at all, but chances are you'll be able to get whatever color you prefer all around the globe in time for Christmas.

So are the ladies out there tempted to go for the Pink Galaxy S III, or have you already set your heart on one of the other versions?

A hat tip to Jongil Moon for sending this in!

i like this latest phone and color also awesome

I have a 16gb SIII, were could I buy just the pink casing? will it fit my SIII?

I would like to know how it will cost if I want it to come to my hometown and how it can cost if if it is to come by ship. Unless if if it is free shipping because where I am and the place it is going to first land at it will cost a lot of money.