Pixel 2 has among the best LTE speeds in the US

A full test report comparing the practical networks speeds of the latest smartphones was shared with PCMag.com and the results are quite interesting. The Pixel 2 comes out on top as the best performer in all nearly all signal strengths while the iPhone X was the slowest.

For these tests, Cellular insights included two variants of the iPhone X, one that uses an Intel modem, and another that uses a Qualcomm modem. As for the other contenders – the Galaxy Note8, Google Pixel 2, and LG V30 are all powered by the Snapdragon 835, which includes the current industry-leading Qualcomm X16 modem.

These tests were performed on LTE Band 4, the most common band used in North America. Tests were performed in both 2x2 MIMO and 4x4 MIMO. Since the iPhone X doesn’t support the latter, the second batch of tests pins three similar devices against each other. So this is where a combination of signal strength and the choice of radio components would put a phone ahead of the others. 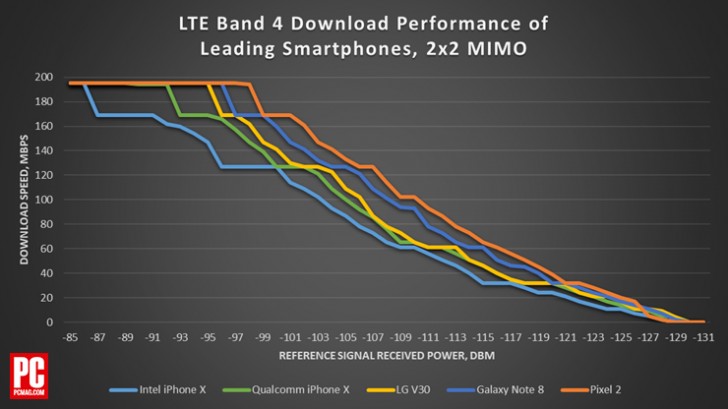 -85 dBm is the strongest signal and -130 dBm is around where signal is lost. The chart above includes the two iPhone variants and three Android phones. Note that the Qualcomm powered iPhone X was generally slower than the others, though not by very much. Apple has been accused of intentionally slowing down Qualcomm’s modems in the past. It is said to be to keep network performance consistent between the different modems.

The following chart is now phones with 4x4 MIMO enabled. Naturally, both iPhone X models will sit this one out. This network mode doubles the transmitting and receiving antennas used for much higher potential network throughput. 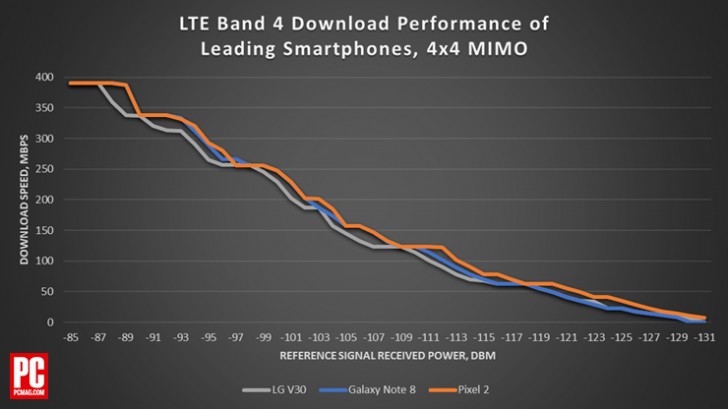 In weaker signals, the Pixel 2 performed better than the Galaxy Note8 and the LG V30. Though, they were generally very similar in results. Once you take a closer look at the weaker signal range, you can see that the Pixel 2 was able to get the fastest speeds with the weakest signal. 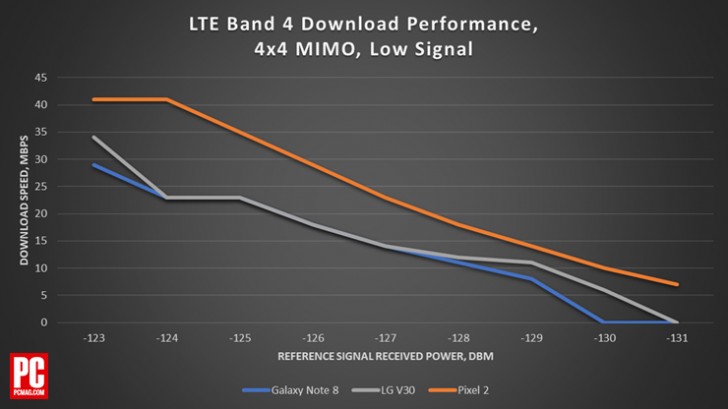 Now comes the question of whether or not Apple slows its modems down on purpose. We’d predict one possible reason to stick to 2x2 MIMO and not opt for the faster connection concerns battery life. Apple phones aren’t praised for battery capacity, so Apple might need to squeeze it out wherever it can, and that could even mean slowing down its modems or even its processors.

Check out the full report at PCMag.com by going to the Source link.

I am selling the Pixel 2 XL I got last week because the screen is disgusting. Regardless the color profile it is always too blue but once you enable "night mode", it is always too red. Pixel 2 have a great camera but you never know what photos you've...

People still think that the Pixel 2 has problems? LOL. They already fixed the software bugs so it runs as intended. The 2XL screen cant be fixed but its really not as bad as media says it is. No wonder why almost half of youtube tech reviewers ...

Puts article from Sony sight, you got to be joking right? :)