Pixel 3 Lite XL does Geekbench again, brings only 4GB of RAM this time

The Pixel 3 Lite XL surprised us the last time it visited Geekbench – it had 6GB of RAM, which is a something no other Google phone has. But does it? There’s a new result from a XL Lite and it only shows 4GB of RAM.

Google is not one to offer different RAM capacities. In fact, all Pixel phones have had 4GB of RAM and that’s that. The search giant barely bothers to offers a choice of two storage levels. 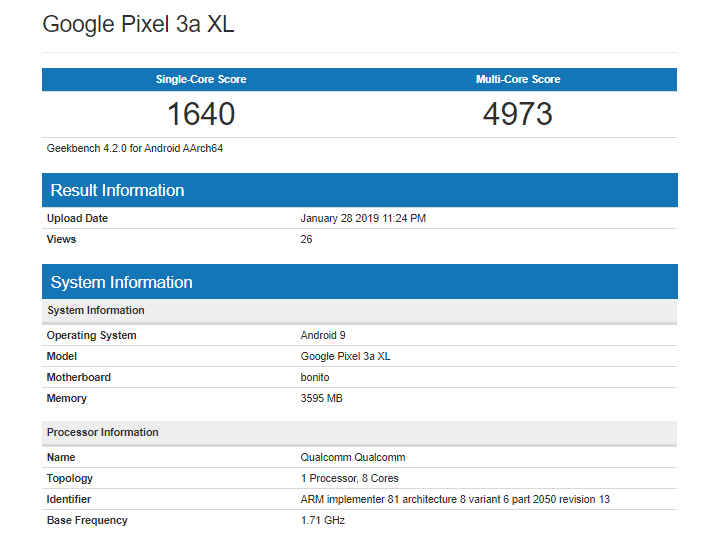 We know this is a “Lite” version rather than a variant of the regular Pixel 3 XL because of the code name – Bonito and Sargo are the upcoming mid-range offerings from Google.

Anyway, it seems that this Pixel 3 Lite XL is using the same Snapdragon 710 chipset as last time. However, the score is lower – Google does have a tendency to underclock chipsets, so it may still be pinpointing the ideal clock speed (note that Geekbench reports only the speed of the small cores, which are not underclocked).

The drop in the score could also be explained by the lower RAM capacity, though Geekbench is not very sensitive to that.

Yep. 4Gb ram is the sensible amount! Ofcourse you can have more and if you keep something like 40+ internet page open at the same time... why not. I always have one or too... so 2-3gb of ram is good enough for me, but 4 is not too much to most reason...

Underclocking runs the processor cooler and can improve efficiency.