Just after its two-month anniversary, the PlayStation Mobile store got support for a few new HTC devices: the HTC One XL, the EVO 4G LTE and the One X+. 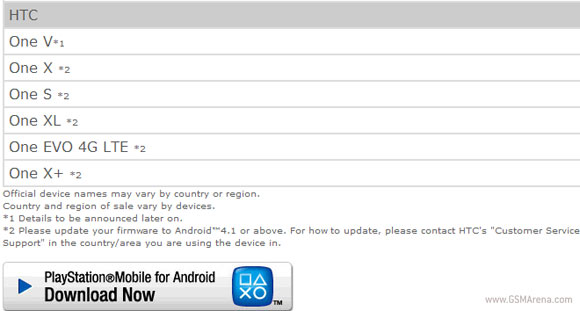 They are joining the already supported One X, One S and One V bringing the number of PlayStation Mobile-certified HTC devices to six. Sony requires all HTC smartphones except the One V to run Android 4.1 Jelly Bean in order to enjoy the game store.

What about the HTC One V, then? Sony says they'll release more information regarding the entry-level smartphone at a later date, since the device might not be getting updated to Jelly Bean, according to recent leaks.

Why don't they provide a manual to explane how to use the product they sell, like a car with no steering wheel.

Sammy remains to be a basic phone with many cores and bright screen, no added features.