Well, Poco finally did it! It's made a phone that isn't just a rebranded Redmi but one that has its unique design and carefully selected feature. This was a much-needed step that marks Poco's coming of age.

So, the Poco X3 NFC has a unique rear panel - it's made of polycarbonate with multiple layers textures and paint. You can see the result of this process - a metallic texture with the POCO logo and a cool hue that reflects light in different ways depending on your surroundings. The peculiar camera setup does help create a recognizable identity for the phone. 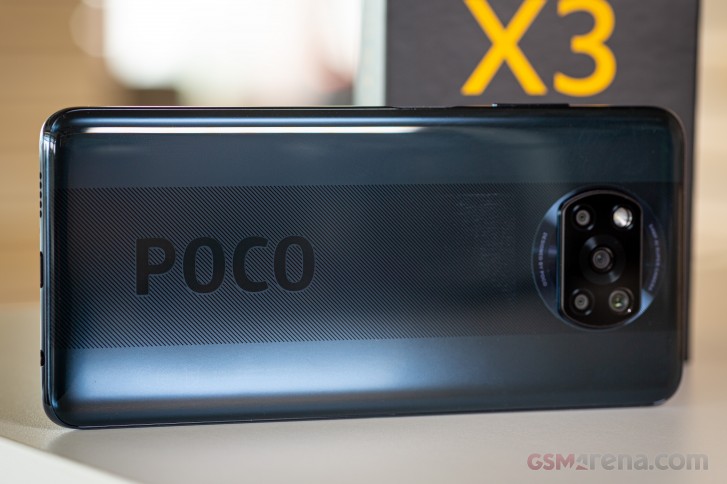 Other than the striped texture and the X-camera arrangement on that curvy setup, the rest is pretty much your typical sandwich smartphone through and through. The front panel is a flat piece of Gorilla Glass 5, then comes the glossy aluminum frame, and finally - the plastic back we've shown already. 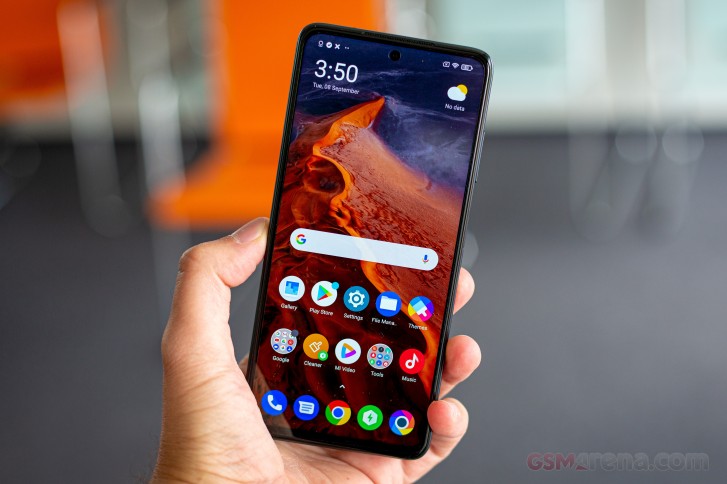 Just like the X2, the X3 has a 6.67" IPS LCD 1080p+ screen at the front with a 120Hz refresh rate. This time the notch is much smaller, though. Poco has ditched the front 2MP depth sensor, and the 20MP selfie shooter has been centered at the top within a tiny punch hole.

The earpiece, which also doubles as a speaker, is not on the glass but carved out in the frame. A white status LED is hidden behind the speaker's grille, too. 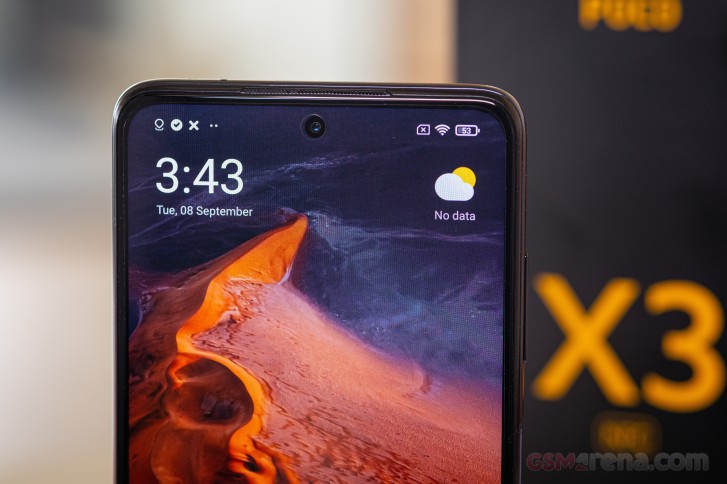 The display's bezels are more than acceptable and while not the thinnest on the market, we did not find them too thick either.

The back, as we mentioned already, is made of polycarbonate and is curved a little bit towards the sides. It contains the 4-camera setup, which protrudes a lot. But because the camera island is not only thick but long as well, the Poco X3 NFC won't wobble as many of the Redmi phones we've tested recently. 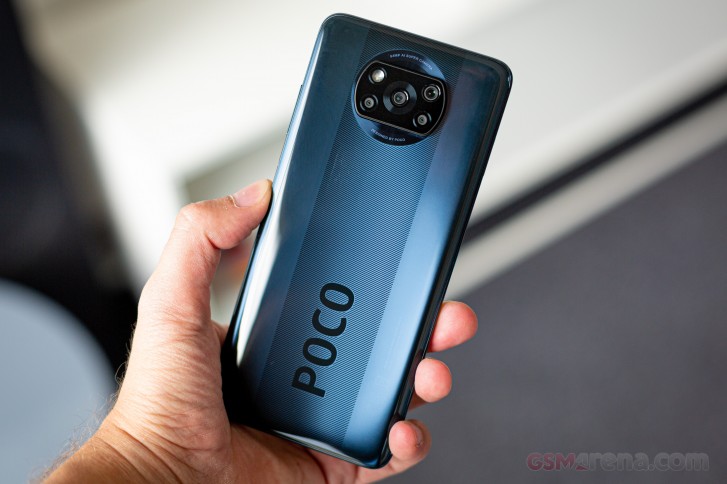 The camera setup has 5 holes arranged in X fashion. The upper row has the LED flash and the primary camera, the ultrawide snapper is in the middle, and the bottom row has the macro shooter and the depth sensor.

There is a lot going on around the frame. On the left, you will see the volume keys and the power button. The surface on the latter doubles as the fingerprint sensor - always-on and blazing-fast as usual. 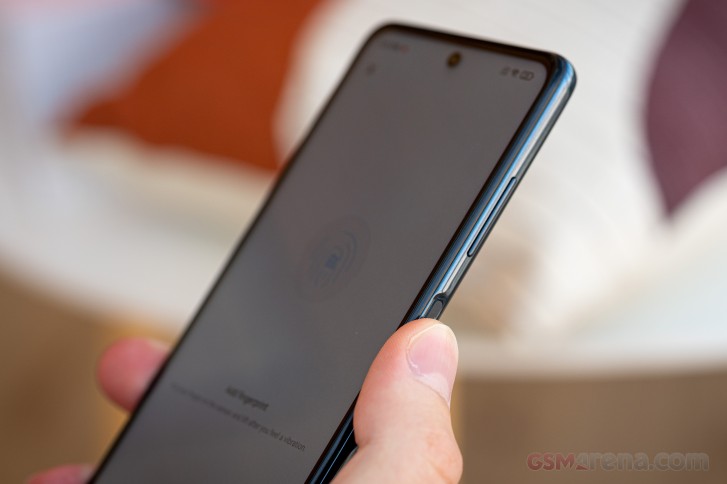 The top has the IR blaster and a mic. 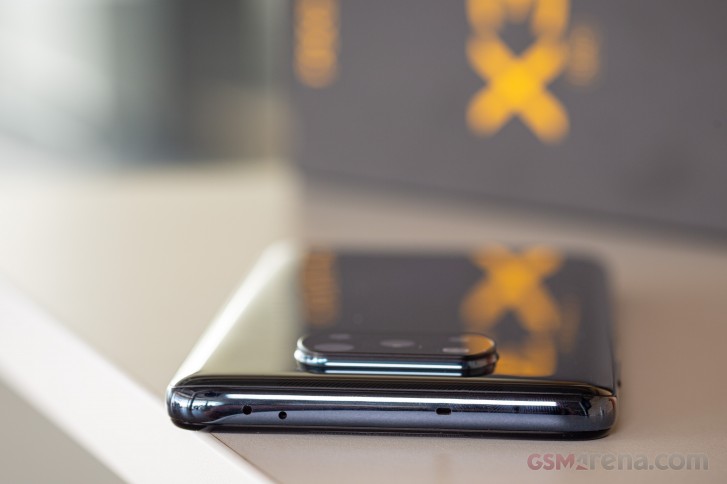 The left side has the lonely hybrid-SIM slot. 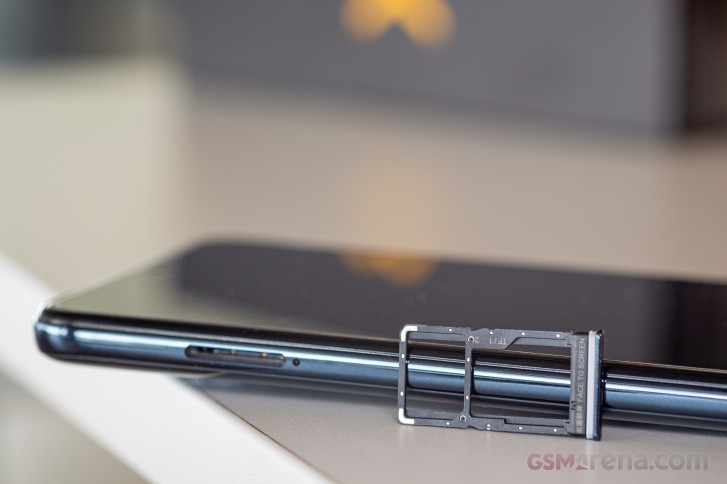 The bottom part of the X3 houses the audio jack, the USB-C port, the mouthpiece, and the second speaker. 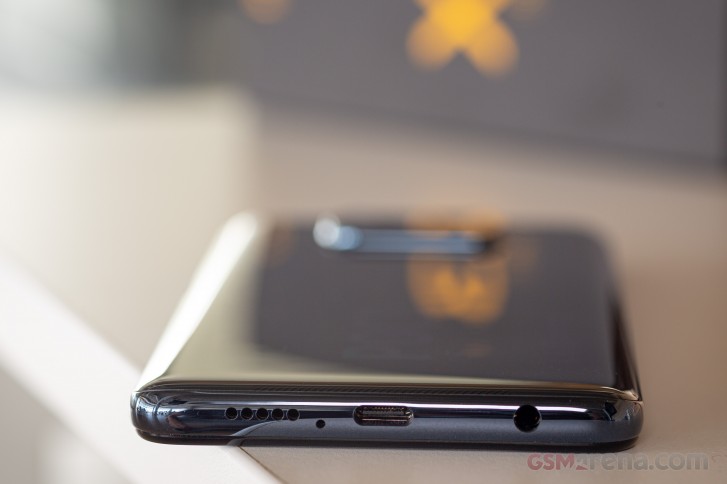 The Poco X3 NFC features a Z-axis (circular) Linear Motor for some advanced haptic feedback. This type of motor has a relatively short stroke as the movement is limited by the vertical axis - the thickness of the phone. The horizontal motors, such as the one inside the Mi 9 Pro or the recent iPhones, have more space and hence - longer strokes. What this means for this Poco X3 is that it will offer accurate haptic feedback across the screen, but it will be neither strong, nor long and complex as the X/Y-axis motors.

Indeed, we played with some haptic apps and found that the Poco X3 Linear Motor provides accurate feedback. But it cannot reproduce more complex patterns such as reloading of a weapon or even a heartbeat for two reasons - burst vibrations are combined into a single buzz because of the Z-axis limitation, and the motor vibrates at a single frequency that just can't do for more realistic vibrations.

Still, the Poco X3 NFC is one very affordable phone jam-packed with features and the haptic accuracy alone is something that few can offer at this price range. Adjust your expectations accordingly and you will not be disappointed.

The Poco X3 NFC is IP53-certified for normal dust protection and resistance to light splashes. If not for anything else, this should give you some extra peace of mind.

Handling the X3 NFC is a pleasant experience - it's a solid phone that fits well in your palm. It is not bulky, but it's not a slim or lightweight phone either. The frame is wide enough for a secure grip even if glossy and we didn't feel the need to use the bundled case. But, hey, it's there so we appreciate it. 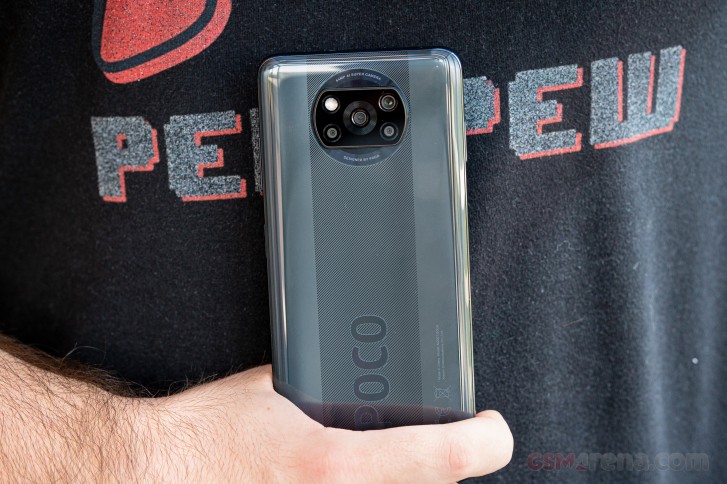 The phone also came with one very slim and cheap screen protector, but we peeled it off right away. It was a massive smudge magnet, and its hole did not exactly align with the selfie punch hole (triggering an OCD we didn't know we had).