Pocophone F1: a list of all countries where it will be available

The Pocophone F1 was unveiled in France, Hong Kong and Indonesia today. But the new flagship killer will cover much more territory than those three countries. Here’s an image from the presentation containing the full list: 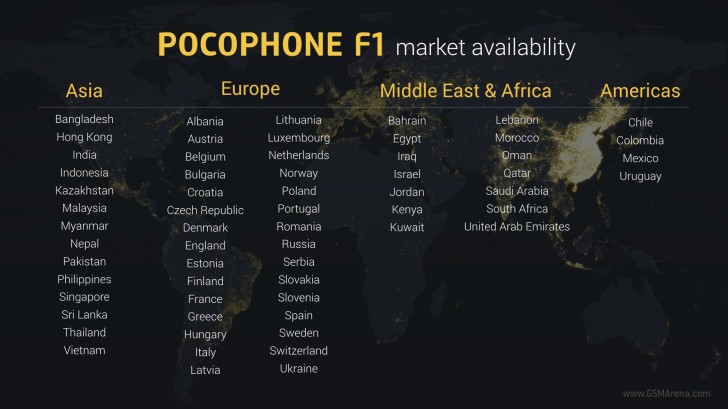 Note that there are going to be regional differences of what’s available. For example, in Spain the 64GB model starts at €330, but Xiaomi offers a €30 coupon that drops the price to €300. Go and claim it here (read the terms and conditions). However, the 128GB model costs more than expected - €400.

Meanwhile in France, the 64GB model starts at €360, the 128GB one is €400 again. The other regional sites are yet to be updated, but it looks like the €330/€370 pricing from the official tweet is not entirely accurate.

when it will be available in Bangladesh. what will be the price?

Very cool that the Philippines is getting it. I remember ordering my $250 Xiaomi Mi 3 from Lazada back on July 17, 2014. Arrived two days later. If the Xiaomi had a microSD slot, I probably would have used it longer. By March of 2016 once I got my $3...

England in the list but still no official release there. They better hurry up and also add NFC or I will be getting the Honor Play