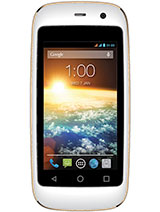 S240, 17 Oct 2016The phone want turn on its flashing the posh sign over and overI've had several well in prison due to the small nature truth is I lilkly know more about these phones then anybody being in a cell all day the fact is the posh micro x 240 has defect not all but most do I've had several of them show the dead android and several Go to flashing on and off the posh sign yes all internet sites say hold the power button in and volume button down go to factory data reset I've tried every thing there is no way to get it off that mode its no good there IAA clear defect to these phone hopefully the jelly and jelly pro don't have these defect

It works just fine. Small screen equals less distractions and more productivity. Still you are connected. Everything else works just a regular phone with few limitations. Do not expect to write fast, browse internet or do home office. Still you have portable hot spot anf fm radio features. I recommend it as emergency phone.. The small size is the best, very confortable to carry anytime and almost anywhere. People look at you wondering if it is capable to do calls..and yes the sound is loud and clear

Eric, 11 Jan 2017Mine just started rebooting over and over again. I think its brickedDid you fix it

I bought one on Amazon for 60€ in Germany. I bet they ship to all EU countries

S240, 17 Oct 2016The phone want turn on its flashing the posh sign over and overMine just started rebooting over and over again. I think its bricked

Can this cell use a thin tip capacitive pencil ?

AnonD-598567, 16 Oct 2016franceI note You bought it in France. However, I do not find any site (in France or Europe) where to buy. I am Belgian and Amazon reject any supply outside of the US.

I've had one of these for a few months now. So far I like it except for one thing; the USB connector is too deep and on the cable that shipped with it is able to make a good connection for charging. My phone needs are mostly minimal so it's nice to have something fully functional but also light and compact. Works perfectly on Consumer Cellular.

can i buy it in france?

Is Skype calling available in this phone??

after seeing this phone reviewed on Unbox Therapy, I decided to try one. for what it is its amazing. yes if you compare it to a modern or even few years old phone, its not great, but when you factor in the size? its rather cool.
I have had mine a few days now, I plan to order the screen protectors next time I order anything. Yes it seems to be the same as the elephone Q, with a few minor differences. when watching a review for the elephone Q I saw some settings that we dont have on the Posh Micro X S240, mostly for screen gestures.
As far as performance goes, its run everything I have thrown at it. Yes even Antutu. it only scroed a 10,000-12,000 (and didnt run the 3d at all)but it still ran. it also ran 3dmark.
I have a Cricket prepaid sim in it, not activated yet though, but have tested the voice quality bu calling into cricket support, while not great, call quality was better than I expected. not to mention the rear speaker is loud for its size. Netflix and Youtube both worked well. They claim the camera has autofocus, I cant confirm that, doesnt seem to work in other camera apps, and with such a tiny screen I cant see if its actually focusing. I know they can make small autofocus cameras, as my Gear 2 has one.
it only has 4gm storage and 512MB system ram, but didnt seem to have issues running an app or 2 at a time. as to the limited storage, you can insert up to a 32GB microSD card in (some have said they got a 64 to work, havent tried yet). the phone lets you decide which to use as the default write disk, so just set it to the SD and you should be ok.
Its running Android 4.4.2, with a odd Launcher, reminds me of iOS, everything is opn the desktop, as you run out of screens, it adds more. worked ok but I installed Nova Launcher. also works well.
All in all I am happy with my purchase, its amazing what they got to work. it has front and rear cameras (2MP rear and 1 MP front) though the system will cheat and say 5.3MP rear and 2MP front lol.
Right now my main use is as a MP3/Streaming Music player, and as a general goofing around thing... not sure I'd rely on it as my main phone, the battery lasts a while on a charge, I get all day out of it with my usage. its only 650mAH. but lasts me all day. but thats with the phone in airplane mode, with wifi turned back on, as well as bluetooth
I know this is just an opinion site, and seems I posted a review, but I had a lot to say in my opinion lol I think its a nice device

one thing, even knowing the size, and seeing the reviews, it was still smaller than I expected. the screen is a bit bigger than the ipod nano 5th gen (I think, the one with the camera)

Arc, 21 Apr 2016True, but this device is cheaper, it comes with more accessories and it ships from the US inst... moreWhat's the price in GBP(£)?

this phone not a joke, i use it as a dash cam for my car due to it smaller size..
video quality is fine! good for backup phone incase emergency and probably the best if it have a waterproof like go pro case.. so i can fit it on my helmet while riding bike too..

Gialu, 16 Apr 2016This is the same phone as the Elephone Q.True, but this device is cheaper, it comes with more accessories and it ships from the US instead of China.

This is the same phone as the Elephone Q.