Samsung was expected to decorate its Galaxy S5 smartphone with usual spin-offs like the Active, mini, Zoom and the company did not disappoint us. In fact, it looks like we will be treated with one more Galaxy S5 variant in the form of Galaxy S5 Neo.

An unknown smartphone with a model number SM-G850 has appeared in benchmarks. The device is suspected to be the Galaxy S5 Neo, a cheaper version of the Galaxy S5 with a smaller screen, just like the Galaxy Note 3 Neo model. 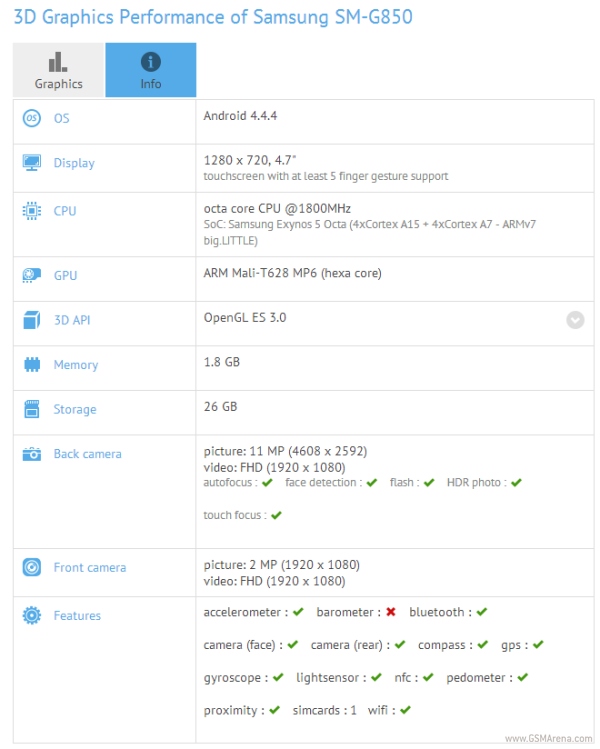 According to the benchmark results, the possible Galaxy Neo S5 sports a 4.7-inch display with a resolution of 1280 x 720 pixels. Under the hood lies a 1.8GHz Exynos 5 octa 5410 processor with four Cortex A15 cores and four Cortex A7 cores, ARM Mali T628 GPU powering the smartphone.

The device also features 2GB of RAM, 11 megapixel rear camera, 2 megapixel front facing shooter and 32GB of storage. The smartphone will support a wide range of connectivity option such as Wi-Fi, NFC and Bluetooth 4.0.

Lastly, the report reveals that the smartphone will run on Android 4.4.4 KitKat. We expect the device to feature a skinned layer of TouchWiz. There is no word on the availability and pricing details of the S5 Neo, but we will know more when the device goes official.

Galaxy S5 Neo is garbage!!! Problem with the microphone Garbage!!!