Premium phone market slumps, Apple still holds half of it

Counterpoint reports that the market for premium smartphones shrunk 8% globally during the first three months of 2019. It defines smartphones as “premium” based on their price – over $400.

Apple’s shipments tumbled 20% year on year. Part of the reason is that buyers are holding on to their iPhones for longer – the average is now 3 years while it was once 2 years. Another factor is lower shipments in China.

While North America remains the largest market for premium phones (30%), China is close behind (26%). However, the Chinese market was sluggish in the first quarter, which was the other major factor in the global slowdown.

Huawei is the third biggest player globally, riding the success of its flagships with Leica-branded cameras. It surpassed Apple in China, but there’s trouble ahead.

The trade ban will slow down the company’s global growth. Premium phones account for 18% of Huawei shipments and they are the most profitable segment. But as sales decline, Huawei will have to reduce marketing and R&D budgets for the future. 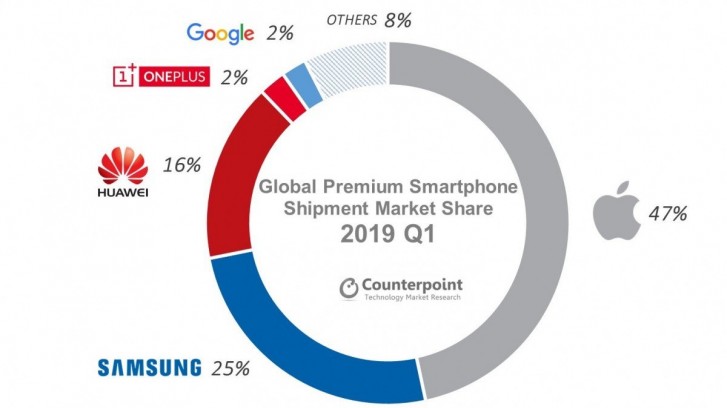 Samsung is benefiting from both Apple’s and Huawei’s struggles. A quarter of premium smartphones shipped in Q1 globally were Galaxys. The Galaxy S10 were seen as better value for money over the iPhone family, say analysts, which helped Samsung secure its biggest share of the premium market over the last 12 months.

Breaking into the premium segment is difficult for newcomers as it relies on a strong brand. OnePlus has successfully pulled it off and it’s in the Top 5 not just globally, but in North America as well. Since its launch in India, the OnePlus 6T has maintained the status of the best-selling premium phone in the country (including in Q1 2019).

The analysts believe that the incoming 5G phones will help the premium segment grow. It will be a while before those reach the mid-field, all 5G phones in 2019 and 2020 are expected to be premium models.

"iPad does split screen, where the screen is big enough. Useless on a phone" a big LOL? it would be useless for a screen to be split if it's small.. like trying to put a split screen option to the 3310 screen like (^___^)

LOL but of course, iPhone users never need anything that they don't have. I personally use split screen on regular basis.

Lol nope, useless for you because you're a typical i-user who "doesn't need" anything the phone doesn't have. I use split screen on regular basis.