The new iPhone 5 is a tough phone to get. We've already seen what it's like in front of Apple's brick-and-mortar stores, but there's quite the line forming at their virtual stores as well.

Pre-orders started on September 14 and hit 2 million in a day. The iPhones pre-ordered then should ship on September 21, but if you are to pre-order one now you'd be in for a long wait - the Apple Store site warns it will be 3 to 4 weeks before the latest iOS smartphone ships. 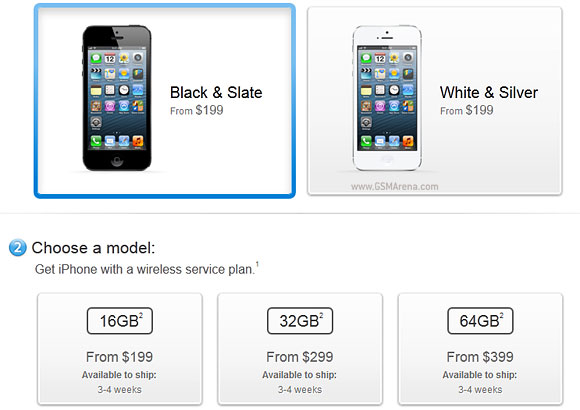 That's for the US store. A quick glance at the Canada store shows the delays there will be the same.

The situation at the UK Apple Store is a bit better. In Britain the iPhone will be dispatched in 2-3 weeks, unless you want the 16GB model in black - that will take 3-4 weeks (that's likely the most popular model).

The German store lists 2-3 week delays for all models and so does the French store. Australians who pre-order now are looking at 3-4 week wait before their new iPhone ships.

ALL Propaganda for APPLE, they can easily add every single feature that’s available right now but they know they got you guys where they want, they make a new iphone every year, add 1 little thing and they know people will PEE-PEE there Panties just ...

I admit iphone are nice products but since somebody stole my iphone last month, I got a Samsung S3 instead of waiting for the iphone5. and its like somebody opened my eyes to the real world. bigger, better screen, faster, more control, free to load...

what the iphone 5 should've been. 4.5 inch 720p screen 1.5 quad core micro sd card slot removable battery 12 mp camera with optical stability. but at apples pace I should get this in iphone 7. so I just got the samsung galaxy S3 instea...