Samsung Galaxy Folder, the clamshell Android smartphone, puzzled everyone when it was leaked for the very first time. Later, we also saw the live image of the Galaxy Folder, which was supposedly going to be dubbed Galaxy Golden. Now, we have the press renders of the flip phone, which confirms that, the launch of the Android powered clamshell phone is just around the corner. 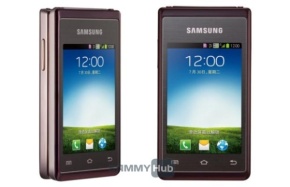 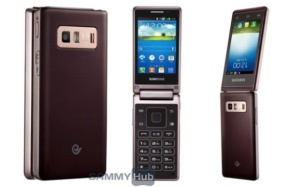 The Samsung Galaxy Folder carries the model number SCH-W789 and is rumored to sport a 3.3-inch HVGA display and a 1.2 GHz quad-core processor. The smartphone is said to feature a 5 megapixel camera with LED flash, 1 GB of RAM, microSD card slot and Android 4.1 Jelly Bean.

According to the report, Samsung Galaxy Folder is expected to be available from China Telecom in the upcoming days and will support both CDMA and GSM networks. Unfortunately, there is no word on the global availability of the device at this point.

When will it be launching in Indonesia? I heard Samsung would launch it this year in August-September?! I'm really looking forward to it...

Thank you, Jack! I happen to be one of those people, because I can type at at least 35 WPM and 100% acuracy with a physical 12 button keypad and predictive t9, at least twice as fast and much more accurate than anything I've found with a just a touch...