We have waited months to get a peek at the next Nexus device but other than some random rumors we got nothing concrete. That is, until now. All of a sudden a whole bunch of images have surfaced, allegedly of the next Nexus phone expected to be announced this month and if there's one thing they have in common, it's that they have the LG logo on them.

The first set of images posted on the xda-developers forum look slightly different because the device apparently had some sort of case on the back that hid its actual design, not uncommon for unannounced prototype devices.

We can see from these images that the phone is made by LG and runs Android 4.1.2, which just seems like a slightly newer version of Jelly Bean.

But then these new set of images were sent to Android and Me, first posted on Onliner.by, that show the device in all its glory.

We see that the phone (model number E960, codename 'Mako') has a sleek shape with a completely flat back that has these crystal-like pattern inside that gradually becomes more pronounced as you go down the back of the phone. You can see the camera lens flush against the back with an LED flash (our guess would be an 8 megapixel sensor; anything more would have popped considerably out of the case) and a loudspeaker grille near the bottom. You can see the usual Google and OEM logos, the latter belonging to LG, in this case.

We don't see much of the sides but from what we can tell there is a power button on the right, the volume controls on the left and the headphone jack on the top. On the bottom is the microUSB port with two curious slots, possibly for some sort of a docking device.

On the front the phone looks remarkably like the Galaxy Nexus from Samsung, It has the same buttonless design, with the earpiece near the top edge and a front facing camera. Google has integrated the navigation controls at the bottom of the display once again. This area looks decidedly grayer than the black bezel of the phone, which suggests that it is an LCD, unlike the pitch-black AMOLED on the Galaxy Nexus. This shouldn't come as a surprise considering how deeply LG is invested in LCD technology.

That's all we can gather from these images. We are definitely hoping to see more of this phone in the coming weeks and learn more about it, especially on what's ticking inside that sleek body.

Update: According to the NenaMark2 benchmark score uploaded on the Nena Innovation AB website, the LG device has a display resolution of 1280 x 768 (it shows up as 1196 because of the space taken up by the navigations keys). It also has a 1.5GHz Qualcomm Snapdragon processor with Adreno 320 GPU, which means it is the same APQ8064 found on the Optimus G. 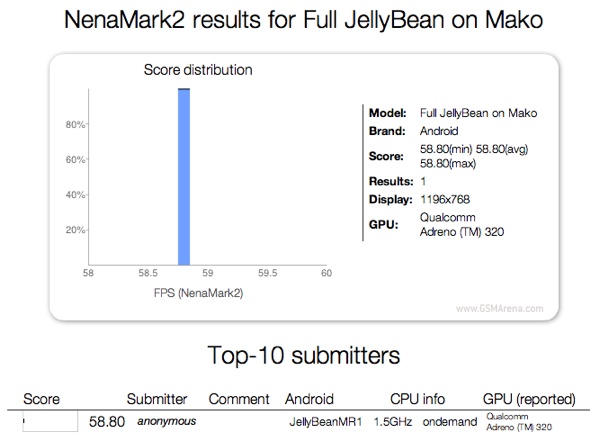 The actual benchmark score is not really relevant here because the framerate is limited by the display v-sync at 60 fps and as such as not a true indication of the level of performance the hardware is capable of.

This makes me sick. Nexus, Nexus, Nexus. Lg nexus 4, Htc DLX, Samsung galaxy nexus 2, Motorola Razr Nexus, google next nexus 7. Damn there are way too many nexuses. But no one can say if they are real or not. There is no android 4.2. There is android...

No one 'steals' tech from Samsung. They buy it. Because Samsung is still a company that needs to make money. And almost every tech company has bought memory/chips from Samsung. LG also innovate on their own, like the screen technology for example. Of...

The Optimus G is the best to continue the Nexus legacy, because it is the best looking and the best specd phone on the market.