It was back in April this year, when a benchmark listing for an entry-level Samsung phone suggested the company could be working on an Android Go smartphone. Subsequent reports have revealed more about the phone's (SM-J260x) market availability.

Specs revealed so far include 1GB RAM, Android 8.1 Oreo, and a quad-core processor. And now, a new leak has surfaced, which reveals a few more key details of the handset. 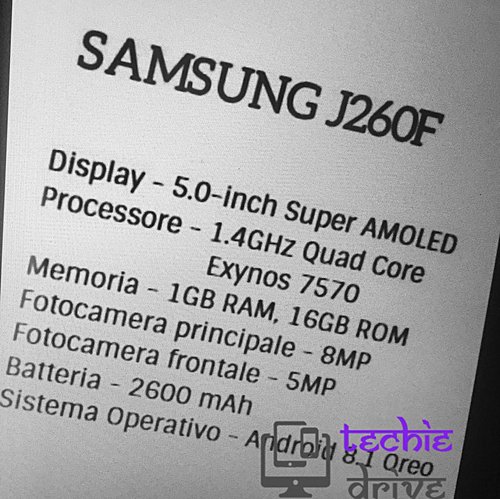 As per the leaked image, the Samsung Android Go phone will be powered by the Exynos 7570 SoC, and sport a 5-inch display. Storage is 16GB, while camera setup is 8MP at the back and 5MP at the front. A 2,600mAh battery will be there to keep the lights on.

Knowing Samsung: Only 1 OS updates if you're lucky and very few security patches. The only Samsung products worth buying IMO are their memory cards and SSDs (since Memory Cards from Sandisk are kind of hard to find in my city). You'll be better ...