Qualcomm is expanding its Snapdragon lineup - adding chipsets to both the entry-level S1 line and the Krait lineup. Krait is a brand new design that will scale to up to 2.5GHz with one, two or four cores. It promises better power efficiency than current architectures. 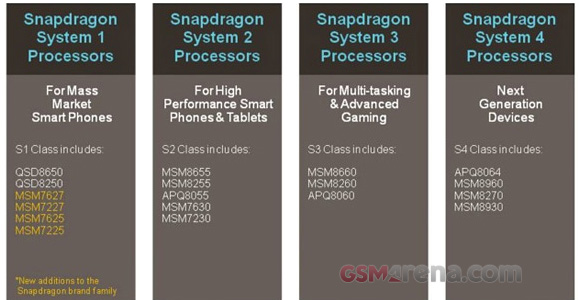 The S4 badge will be carried only by the best of the best Snapdragon chipsets with Krait CPU architecture and next-gen Adreno graphics (dual or quad core GPUs).

There are eight new chipsets, which are joining the already announced MSM8930 and MSM8960 (single and dual-core CPUs respectively) and the Snapdragon APQ8064 (with a quad-core CPU and Adreno 320 GPU), which will supposedly power the rumored HTC Zeta.

The first products with Snapdragon S4 chipsets are expected to show up in early 2012 - starting with the single and dual core versions but we'll be seeing quad-cores later on too.

Qualcomm also announced four S1 chipsets, which are aimed at entry-level smartphones but have been upgraded to offer better performance than we're used to see in this segment. Specs for the S1 line are scarce but we can expect up to 1GHz CPU clock speed and Adreno 200 GPUs. There's a focus on 3G connectivity too, to bring entry level smartphones out of the 2G era.

by the time this will be available, there will be rumors of the next nVidia chip, the successor of kal-el