Renowned mobile hardware giants Qualcomm have just announced their Snapdragon Game Pack, an optimisation program with a suite of more than 100 mobile gaming titles already under its belt, designed for the latest Snapdragon enabled devices. Qualcomm are releasing the pack in light of the success they've had with their processing and graphical mobile chipsets which already feature in over 125 different devices and with a further 250 more in development from OEMs and operators across the globe, they have a lot to look forward to.

It's also a means for Qualcomm to buddy up with a host of developers and publishers making titles with the Snapdragon infrastructure in mind. Their press release carries praise for all manner of mobile gaming publishers including; Gameloft, Digital Chocolate, NAMCO BANDAI Games America, Glu and a whole bunch more. The biggest pull for the Game Pack is the promise of greater things to come. The current list of 100 titles is sure to grow and the quality of mobile gaming is certain to develop and improve as time goes on. 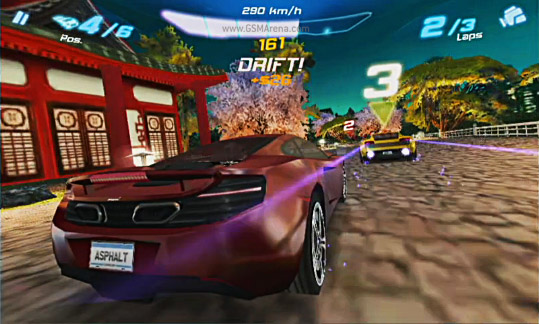 Drifting behind a Lamborghini in Asphalt 6: Adrenaline

With mobile gaming experiences already starting to resemble, equal and even surpass what we've come to expect from dedicated mobile and household gaming consoles (we're looking at you NGP), the appeal for gaming on your phone will just keep getting stronger. Qualcomm have said 60% of smartphone users regularly play games and as the next generation of quad-core Adreno GPUs get thrown together with the upper echelons of Snapdragon performance, that percentage will no doubt increase as more and more demanding and engrossing games join the ranks of the Game Pack.

The Snapdragon-optimized games themselves will be made available to the Android community via Android Market and through developer's own stores and the hope is that this will present opportunities for devs to also generate revenue from pre-installs of games as well as market-based games sales.

Check the source for the full press release from Qualcomm themselves and follow this link here to see the full list of Snapdragon-optimized games you can already get your hands on.

Sorry pal, but looks like casual market won, and restarted games like candy sagas and other trash making millions while psp vita collecting dust, it's a shame, waste of amazing platform :((

Will these games work on the Sony Ericsson Xperia Mini Pro?

You shouldnt worry really. At the end of the day having actually buttons to play games and proper analogue sticks is still best for playing games. Majority of mobile phone game players are usually the Casual market. not so much the hardcore. yes the ...