Qualcomm's Snapdragon Technology Summit in Hawaii is still going and new bits and pieces about the company future products are incoming. Yesterday the company announced the arrival of its latest flagship chipset Snapdragon 845 and now the company took the time to list its detailed specs. The new SoC will have octa-core CPU, clocked at up to 2.8 GHz, new GPU and AI platform, based on the Hexagon 685 DSP.

The keywords VR and AR are also in the game with out-of-the-box eye tracking, hand tracking, and multiview rendering. Qualcomm even goes as far as to call the Adreno 630 a “Visual Processing Subsystem”. 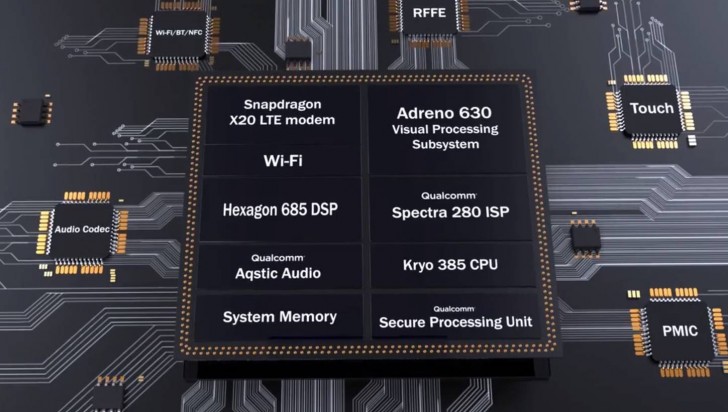 The Hexagon 685 DSP now also works as an AI image co-processor. Being three times faster than the Hexagon 682 that is in the Snapdragon 835, it will support Android 8.1 Oreo’s Neural Networks API. This means better always-on keyword detection and ultra-low-power voice processing.

The connectivity can now reach 1,200 Mbps downlink thanks to the X20 cellular modem. There are also proprietary enhancements for Bluetooth 5, which should reduce battery consumption of wireless earbuds in half.

Qualcomm is expected to start shipping the Snapdragon 845 to smartphone manufacturers in early 2018. As already announced by Lei Jun, Xiaomi CEO, one of the first flagships with it will be the Xiaomi Mi 7, but previous rumors put the Samsung Galaxy S9 as being the first.

It's all theoretical. It may be designed for A but it may be able to run B. That's all I'm saying.

it's not only about SoC to record a slow motion video, Sony Xperia XZs can record 960fps with Sony Exmor RS IMX400 camera sensor, with Snapdragon 820 SoC.

The answer is no my friend, Apple A chip is designed specifically for mobile computing running ios, they won't need to make the x version of their chip for ipad pro