Qualcomm sends out invites for the Snapdragon 660 unveiling

Qualcomm has sent out invites for the Snapdragon 660 unveiling - the rumor mill’s favorite chipset for premium mid-rangers of late. The 660 will follows in the footsteps of the excellent 652 but will be much closer to the company’s flagship chip.

It will use an octa-core processor with Kryo 280 cores, the same hardware as the Snapdragon 835. However, the 660 will be built on a 14nm process rather than 10nm. Still, the newest Kirin 960 is built at 16nm and so is the outgoing Apple A10 chip.

The GPU will be Adreno 512, and it’s not yet clear how it will compare to other Qualcomm graphics - weaker than the 540 for sure, but how much weaker? 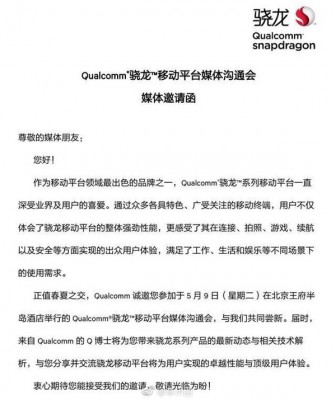 Press invite for the Snapdragon 660 event

Anyway, those are questions to be answered on May 9 (next Tuesday). Perhaps we’ll get to see some of the first Snapdragon 660 phones show up on stage. But even if we have to wait, there are some amazing devices that are rumored to use the new chip - Nokia 7 and 8, the Xperia X Ultra and the new Xiaomi Mi Max.

Kryo 280 seems based upon a73, but the prior kryo seems to be a new design

I'm making two points: 1. simd (not fp) is fine 2. the jpeg specification calls for only integers, starting with the quantization step on the encode side. certainly there are non-normative fp implementations because using fp allows for greatr precisi...

It is well known that kryo280 is based on A73 and kryo is based on krait , as I told you before. Anyway, look at this image and tell me what makes you think "A57 and kryo is similar". http://images.anandtech.com/graphs/graph11088/kirin_960-per...