Qualcomm unveiled the chipsets that will power a good number of next year's flagship and mid-range phones. The Snapdragon 810 and 808 both bring improvements in processor performance, 3D rendering and LTE.

Both have 64-bit processors and use ARM Cortex A5x CPU cores instead of Qualcomm-designed Kraits. They leverage the big.LITTLE architecture, similar to the Samsung Exynos quad and hexa-core chipsets.

Note that these aren't the first 64-bit chipsets by Qualcomm, the first was the Snapdragon 410, followed by the 610 and 615.

The Snapdragon 810 replaces the 805 as the top of the line chipset. It features four Cortex-A57 and four Cortex-A53 processor cores. Those are the Cortex-A15 and A7 replacements respectively, but the A57 should offer a 25-55% increase in performance at the cost of just 20% increase in power consumption. And the power consumption will probably actually be even as the 20% difference will be offset by the use of a 20nm manufacturing process, instead of 28nm. 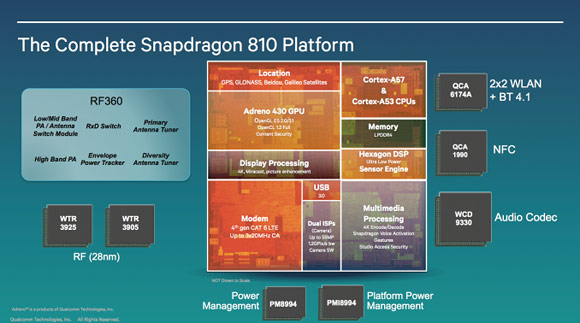 The way the two new chipsets work is that the CPU cores are divided into two groups. All cores can work at the same time, but cores in a group must use the same frequency (the two groups can use different clocks though). This differs from the Krait designs where the clock speed of each core can be set individually. 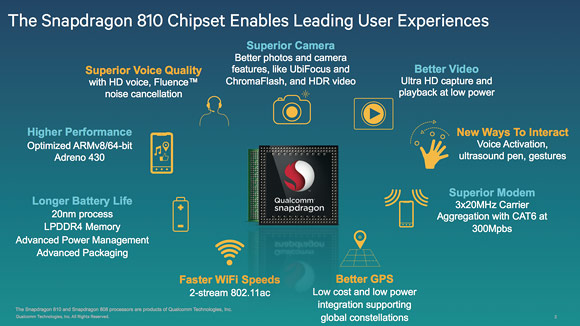 This chipset also has a hardware H265/HEVC encoder. The ISP uses 14-bit image processing, both of which can have tangible effects on camera image quality.

This one uses an A57/A53 combo but is a hexa-core processor – two Cortex-A57 cores and four Cortex-A53 cores. Given the performance benefits of the new cores, the 808 chipset should be about as good as the current quad-A15 designs.

Both chipsets should be available in H1 2015.

The two new chipset feature 4G LTE Cat. 6 modems, which offer whopping maximum download speeds of 300MBps. To do that it bonds up to three 20MHz data pipes, compared to Cat. 4 modems that use a single 20MHz channel. 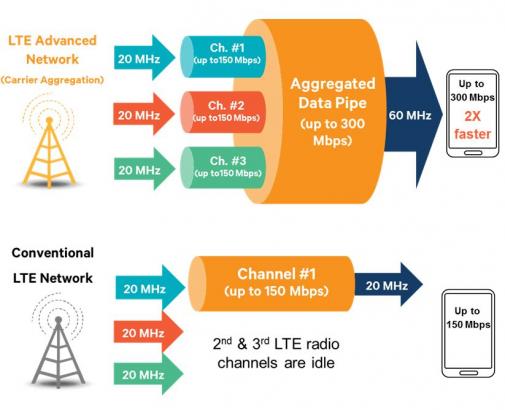 This, of course, relies on the carriers having enough available bandwidth. If there are not enough 20MHz channels, the modems can use 20MHz + 5MHz + 5MHz to boost the speed.

And they will make great phones with this SOC but ofc with retarded screen resolutions (hint qHD) wich will drain all the battery playing even a mediocre game, or just by beeing on.