A leaked presentation spilled the beans on the next generation of Qualcomm Snapdragon mobile chips and it all looks to be coming up roses.

All four next-gen chips are based on the upcoming 28mm Krait architecture. The MSM8270, the MSM8930, the MSM8960 and the APQ8064 are all expected to be up to 5 times faster that existing mobile CPUs. Graphically, they're also going to be up to 4x quicker than what's currently on the table, taking devices like the Sony NGP and Nintendo's 3DS to task, and promising "console quality gaming".

A 28 nanometer processor will have about a 23% computing power advantage and will use 47% less power than a similarly clocked Cortex A-15 chip. These new Snapdragons will be clockable up to 2.5GHz and will come in both single and multi-core varieties (up to quad core).

The MSM8960 will come with both 3G and 4G LTE options and should become available at the end of Spring this year with the other 3 undergoing testing for the remainder of the year. The slides below show just how potentially dramatic this gear shift in processor ability will be but don't expect any of the new chips to be actually available in a mobile device this year. 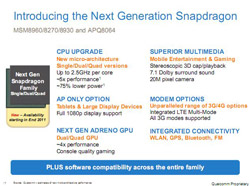 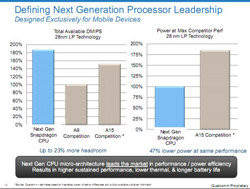 As you can see, features like 1080p HD video and 3D will be a doodle as well as support for 7.1 Dolby Surround Sound and even accommodating for camera sensors up to 20MP. It's clear that the devices running these chips will be serious hardware monsters, it's now just a matter of time until these beasts see the light of day. We can hardly wait!

It was qualcomm golden era, until SD 810

Nothing to see here... move along... Mobile CPU evolution at its best! Enjoy the show guys! :D

the specs may suggest more power is saved, but when you boost the amount a CPU can process then manufacturers pump more power consuming features into it making the battery burn away just as quickly. Software development needs to match it since discov...