The side-slider Nokia C6 runs on Symbian S60 5th edition (a.k.a. Symbian^1) and packs quad-band GSM/GPRS/EDGE support and quad band 3G with HSDPA. It comes with a 3.2" touchscreen of nHD resolution, capable of displaying up to 16M colors. 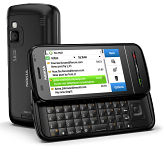 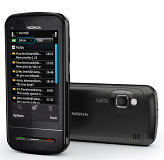 In terms of local connectivity the Nokia C6 has Wi-Fi, USB and Bluetooth to offer and there is also an integrated GPS on board. The 5 megapixel autofocus camera relies on a LED flash to assist its low-light performance. 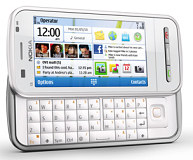 Nokia C6 should be available before the end of the current quarter for an estimated price of 220 euro before taxes and subsides.

Next comes the bar-shaped Nokia E5, previously known as Nokia Mystic. It has quad-band GSM/GPRS/EDGE and tri-band 3G/HSDPA support and runs on the non-touch Symbian 3rd edition OS.

Nokia E5 should be available in the third quarter of this year for about 180 euro before taxes or subsides.

The final announcement for today is the bar-shaped Nokia C3, which is the most affordable of the bunch. It lacks 3G connectivity so network access is only possible via quad-band GSM/GPRS/EDGE. Built around a 2.4" 262K-color display of QVGA resolution and a full QWERTY keyboard, the C3 is a rare breed of S40 phones to have Wi-Fi connectivity.

Nokia C3 is the only handset of the bunch running on the Series 40 feature phone platform. It will start shipping in Q2 of 2010 in Slate Grey, Golden White and Hot Pink for an estimated price of 90 euro before taxes and subsides.

Had the nokia e5 for a year already. Wouldn't trade-in for another phone, coz its juz so cheap and its juz tat good. Awesome stuff nokia !!