Razer Phone 2 unveiled with S845 chip, improvements to the screen and camera

Gaming has become a dominant form of entertainment and gamers tend to be early adopters of cutting edge tech. The new Razer Phone 2 is an entertainment powerhouse with unique features and various improvements over the original.

Let’s start with the gaming features. The screen is a 5.7” IGZO LCD panel with QHD resolution instead – Razer believes 16:9 is best for multimedia. It did make the new screen 50% brighter than before, hitting a maximum of 580 nits (470 nits typical). The company claims that the new panel is better at preserving detail in dark scenes.

The screen has retained the variable refresh rate of up to 120Hz, which eliminates stuttering and tearing. It supports HDR and DCI-P3 wide color gamut for better visuals in both games and videos.

The new Snapdragon 845 chipset has a new vapor chamber cooling system. Razer’s goal was for the chipset to never experience thermal throttling. It’s connected to 8GB of fast RAM and 64GB of UFS storage (we were hoping for an upgrade on this last bit, but we are in no luck). There’s a microSD slot to expand the storage, but it’s not as fast as UFS.

To accommodate the wireless charging, the back of the Razer Phone 2 is now made of glass while the body is still CNC-machined aluminum. It’s now water resistant with an IP67 rating (1m, 30 min). 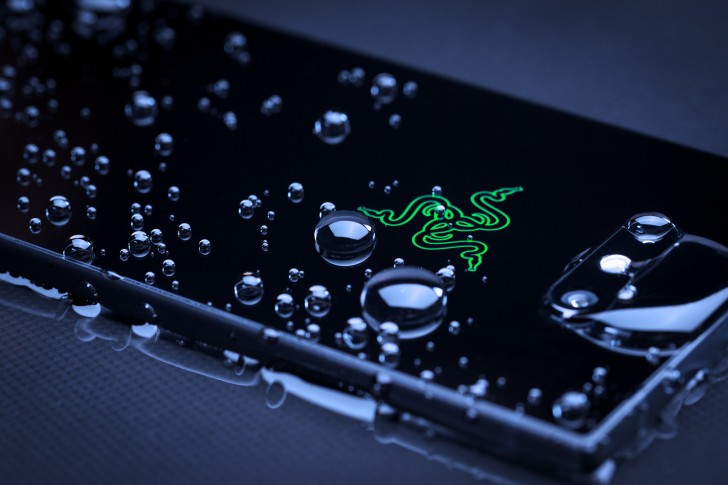 The logo on the back is RGB backlit and supports Chroma. This means that the Razer logo on the back will match the color of its LED lights to the lights on the phone. Razer also has a new pair of USB-C noise canceling headphones that have synchronized RGB lighting as well (both accessories are sold separately). There’s no 3.5mm headphone jack, but Razer bundles a 24-bit DAC dongle with the phone.

The dual camera on the back is new and substantially improved. It sports new image sensors courtesy of Sony. The main 12MP image sensor gains Dual Pixel AF and optical image stabilization (OIS) and it has a bright f/1.75 lens. Then there’s the second 12MP camera with a 2x telephoto lens (f/2.6).

The phone’s 2160p video capture now goes up to 60fps and there’s a 1080p @ 120fps slow-motion mode. The selfie camera is mostly unchanged, an 8MP fixed-focus shooter, though it does gain support for 1080p @ 60fps video capture.

The Razer Phone 2 brings back the powerful front-facing stereo speakers. They are Dolby Atmos-certified and each is fed by a dedicated amplifier. 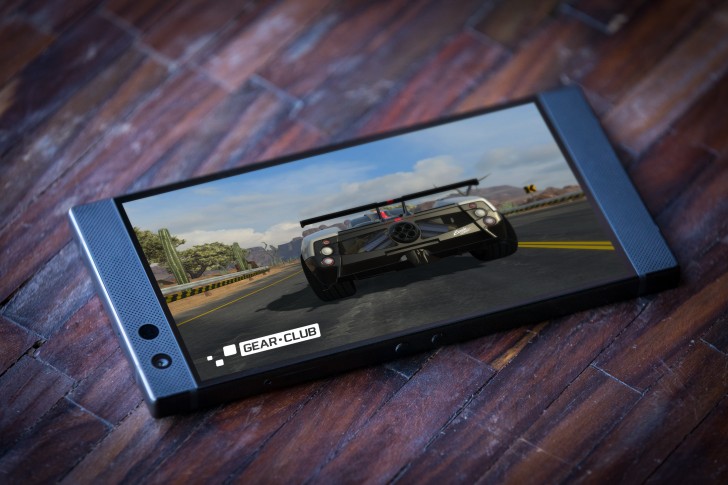 The phone is launching with “near-stock” Android 8.1 Oreo, but Razer is promising an OS upgrade “soon”.

There is a variety of accessories too. The Razer Wireless Charger is $100. There’s a Leather and a Kevlar Case for $40 and $50, respectively, as well as a tempered glass screen protector for $20.

A new Cortex App will be released soon to replace the Game Booster. It will offer per-title game optimizations and tuning of resolution, frame rate and even CPU clock speeds.

There is no more headphone jack, get over it, you have a dongle in the box

That I can agree with. Razer should had make both the Mirrored and metal-backed Satin Razer Phone 2 models with both 64 and 128GB capacities be available for mobile carriers to choose, yet Razer only make the Mirrored model with 64GB internal memory ...