Realme 1 is now receiving ColorOS 5.2, many new features in tow

Oppo spinoff Realme has started sending out a new update to its first ever smartphone, the Realme 1. This won't change the Android version - it's still running Oreo, not Pie - but it will bump up ColorOS to 5.2.

ColorOS is the Oppo-developed skin/custom UI overlay that sits atop its devices and Realme's, and now the Realme 1 is using the latest iteration of it.

ColorOS 5.2 brings a bunch of new features to the Realme 1, including the ability to dismiss notifications with a single swipe to the right, a headset icon in the status bar, a Smart Bar for faster multitasking, background music playback in the video player, new presets for the video editor, custom modes for multiple activities in the Timer app, the ability to add markers during recording or playback in the audio Recorder app, and more. 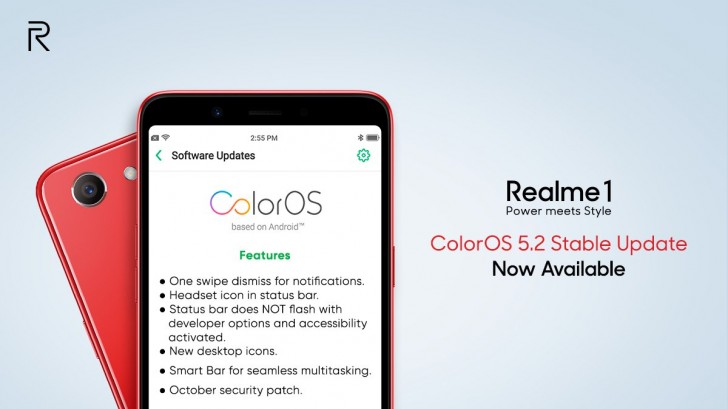 Smart Scan translates text by photo, while Game Space delivers a few things for an ultra-fast gaming experience: it optimizes the game display configuration to fully utilize hardware resources, intelligently allocates system resources for smoother gaming, limits network connections for background apps, and blocks banner notifications and sound alerts. Games can also be kept running even with the screen off.

You can now press the power button for 0.5s to launch the Google Assistant, and you also get new Material Design icons throughout the system - but only if, after installation of the software update, you go to Theme Store > Me > My themes and apply the default one. There's also a new boot animation and a redesigned lock screen UI. The update contains the October 5, 2018 security patch level.

It's a staged rollout. The over-the-air push will go to a limited number of users today and will then get a broader release in a few days after the company makes sure there are no nasty critical bugs.

For Reaelme 2 Pro user, provide the update with a Status Bar not flash for accessibility and developer options.

No. It's not good to see that. Many phones that aren't Android One get monthly updates, or if not, they get the same month's update. Here you update but you aren't even up to date. What's the point.