Realme 3 will have Helio P70 in India, CEO confirms

Yesterday Realme revealed its new smartphone will have vertical dual cameras and diamond design on the back. Later, the CEO of the Indian division went even further with the teasers and confirmed the Realme 3 will have Helio P70 chipset in the country. 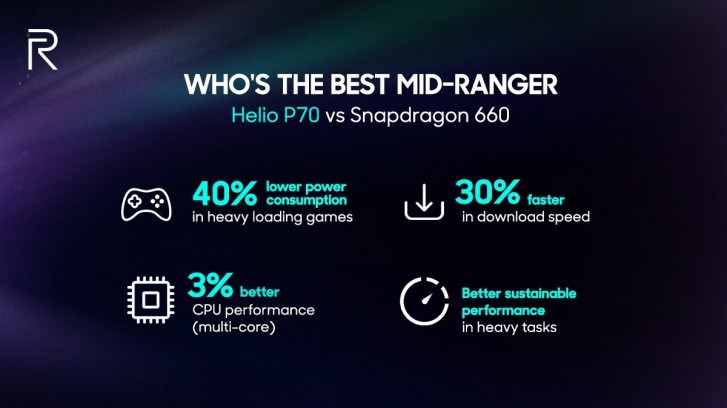 The Realme 3 will be the second smartphone by the company with the MediaTek SoC, following the Realme U1. It is supposed to have lower power consumption in heavy games, faster CPU and downloads, compared with Snapdragon 660, seen in the Realme 2 Pro. It shouldn’t be surprising though - the Helio P70 is built on the slightly more efficient 12nm process compared to 14nm for the Snapdragon.

We are yet to see any official announcement date, but this should be revealed soon as well. For now, we know it will be here by the end of this quarter and could have a 48 MP main camera. Pricing of the Realme 1 and Realme 2 was around INR10,000 (about $140) at the moment of launching, and, ideally, the Realme 3 will match that.

snapdragon beats mediatek with its GPU and no difference in real life CPU performance.

If they are using helio p70, then there should be 6gb/128gb variant below 15k ₹. Like the original Realme 1.

'Realme os' is on the way