Realme 7i leaks with Snapdragon 662, officially arriving on September 17

The Realme 7 and Realme 7 Pro were introduced last week in India, but today a new phone appeared in the rumor mill - a Realme 7i. The name was teased by Realme Indonesia, along with the official launch date - September 17.

In the same time a leaked photo of a presentation revealed the specs of the phone - we’re looking at a new chipset, screen, and some differences on the body as well.

Realme Indonesia will introduce the Realme 7 and Realme 7i - we’re pretty sure the first one will remain the very same Helio G95-powered phone, given the teasers on the landing page, provided by the company. However, the latter is said to have a Snapdragon 662 chip, built by Qualcomm on the 11nm process technology. 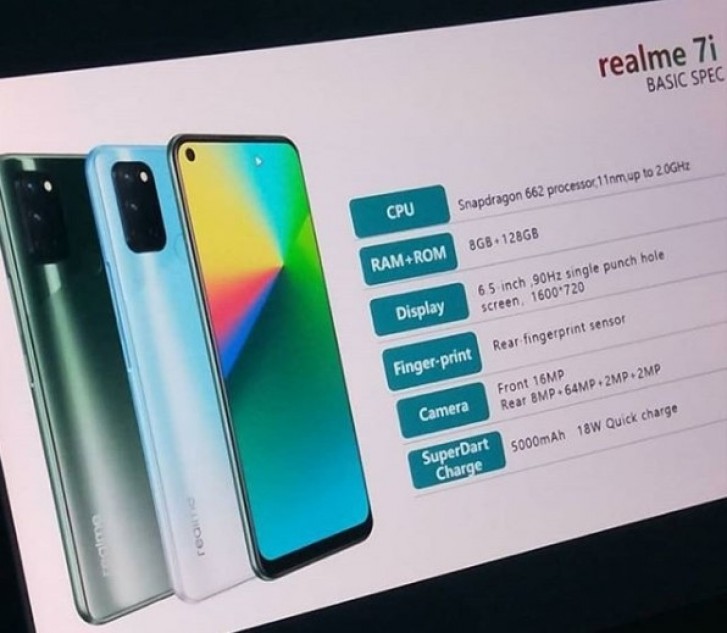 The front of this new phone will come with a 90 Hz 6.5” LCD, but only HD+ resolution, which might hamper the smooth experience of the high refresh rate. The fingerprint scanner is on the back of the phone, while the physical keys will be on the right-hand side.

The launch will be live-streamed on all popular platforms, and when the time comes, we’ll provide you with a YouTube link to follow the Realme 7i arrival from the comfort of your own surrounding.

smooth scrolling, it gives a faster feeling. high refresh rate is not for gamers only