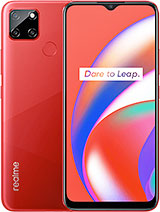 This has got to be among the worst selling budget phones out there
And I wonder why they call the g35 a gaming chip and I could see stutters even on subway surfers lol.
If you are thinking of buying any realme just stop thinking about it mahn don't regret it later like me

Faizan, 31 Jan 2021Please brothers give me your opinion is this phone is best or not. I buy it or not It's really awesome I m already use this phone please buy it

Compared to c3 this model is a scam

Faizan, 31 Jan 2021Please brothers give me your opinion is this phone is best or not. I buy it or not Yes it's good

Suryaputra, 25 Dec 2020Please avoid this phone I'm using since 1 month everything is okay but hanging problem af... morePlease brothers give me your opinion is this phone is best or not. I buy it or not

So tomorrow is the end of Jan 2021 and realme have not met their stated January 2021 update target for C12 phone which realme indicated in their update roadmap in Sept 2020.

buzz, 02 Jan 2021I think phone is good and interface so friendly even not using it.. Dont to comment because it... moreDon't recommend this phone because it runs out of ram. The phone is literally impossible to use. It works for a little bit then bad stutters and lags start happening with simple web browsing. Phone requires a reboot to get it working again for a shortime.

Even when took into realme service, the technician point me to the phone ram is not enough. Hahaha realme technicians pointing out problems with their phones. As if it is the user faulty for buying it.

They better just put Android one OS on the phone, it may work better.

I think phone is good and interface so friendly even not using it.. Dont to comment because it's entry level for daily use

NGC2841, 24 Dec 2020I buy this Phone because of Insane Battery size.. I had very little budget but as i compare t... moreHow to put Game OBB file to SD Card?

Suryaputra, 25 Dec 2020Please avoid this phone I'm using since 1 month everything is okay but hanging problem af... moreYep, recommend to avoid this phone, the performance is really really bad and black screen.

Suryaputra, 25 Dec 2020Please avoid this phone I'm using since 1 month everything is okay but hanging problem af... moreBetter just go to the realms service centre and ask them to downgrade the phone firmware back to 2189..A.71 or A.79.

Mine also has problem and a lot of different models of realme phones are having serious lags stutters using the phone after their Nov 2020 security firmware update. Also realme have made a 2 sec black screen introduced on the phone now when one deletes ones google account. It's either realme or mediately who have issued this problem update.

Their forum assistance is laughable, they keep tellling users with problems to clear cache, clear data, remove files will fix these problems when the phone is just a basic rear device with only their stuff on it.

I downgraded the firmware to A.79 and the phone is working normally again. Service centre said I must not update the phone again until they issue next firmware update next year.

Please avoid this phone I'm using since 1 month everything is okay but hanging problem after the last software update i tried reset but no work. It is lagging a lot 🥺

I buy this Phone because of Insane Battery size..
I had very little budget but as i compare this to Realme C3 which had Helio G70 which is better in gaming...
I just want a phone that will last a Day in gaming..

The major Setbacks and Cons of this Phone was the Helio G35(IMGPOWERVR8320 gpu)which is mostly Outphased this days was a Better Battery life compare to RealmeC3 with 3X more Powerfull Gpu but with Lesser Battery...


Tips:dont install much Apps that run in Background...
The Ram of the Phone is wasn't able that big enough to hold...

And to Install more game u want...just Move the Obb file to SD Card

Bizarre that realme issues an update which serves 3 diff models of their phones. No wonder the C12 performance has been borked by their untested latest update. Their support forum answers are laughable as if they don't know the product and it's problems.

Never buy a realme phone again, it is full of firmware bugs making the phone jerk and unusable.

After last update A.81 this phone became unstable and unusable, fill of jerks and stutters trying to use it, wifi performance was terrible. Went to the service centre and they had to downgrade the firmware back to A.79 and the phone is functional now again.

Anyone know how to stop wifi switching on and connecting by itself automatically when wifi toggle is switch off.

I have tried solution with realme forums and service centre but they cannot help and fix.

There is no setting in realme phone to toggle off oonnect wifi automatically like on other phones.

My C17 does not have this problem and the C12 settings for wifi look exactly the same as C17.

OK, so the system installed chrome version 80 work no problem on realme c12. If one upgrades the chrome in play store to latest version 87 then all the problem of stutters when scroll viewing web pages.

So on this c12 one cannot upgrade the system chrome version as it is not working properly.

Do not recommend to buy this phone.

This phone is full of bugs.

Total of 111 user reviews and opinions for Realme C12.
ADVERTISEMENTS