Xiaomi official announced the Redmi Note launch on March 12 is canceled, and now Realme followed up with cancellation as well. Just like the Xiaomi subsidiary, this brand also opted to have an event but behind closed doors and it will be live-streamed.

This means the Realme 6 is still getting introduced on Thursday, March 5, but we won’t be at the event.

In light of current reports of #coronavirus impact & related advisory by health officials to maintain social distance as a precautionary measure, I'm calling off our biggest event. Will still give live speech in stadium with you watching #realme6series event online. #HealthFirst

The event is still taking place at 12:30 PM at the Indira Gandhi Indoor Stadium, but mass gatherings are getting canceled all across the world following suggestions by the World Health Organisation. During the launch, we expect to see Realme 6 and Realme 6 Pro, as well as the company’s first non-audio wearable. 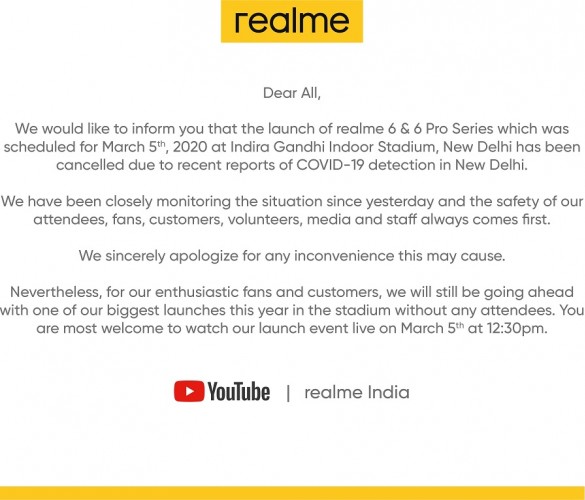 The Realme 6 is expected to have a Helio G90 chipset, 8 GB RAM and Android 10 with Realme UI 1.0 on top. Its Pro sibling should come with a Snapdragon 730G chipset, but we also expect quad cameras on the back, a 90 Hz display and three color options.

Everything is canceled due to the so called flu virus lol. . Google i/o also canceled. The doctor cant figure out the vacine yet. They need to drink tea with honey lmao

Oh no. Now even Realme and Redmi are cancelling their events because of that blasted virus!