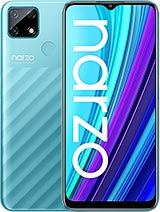 C21y, 27 Aug 2021Oh really. That was sad. My c21y isn't a gaming phone but it has gyroscope. Your phone is in between of Low and medium spec that is good phone if you're just gonna play Battle royal/MOBA but for some games like genshin you might exp. some fps drop issue

Gamer, 26 Jul 2021Narzo 30A is called a gaming phone....but it doesn't even support gyroscope....what a sha... morewhat would you expect from low end device?

Mujtaba, 06 Apr 2021Best mobo for this range in my country bought it gives 2-4 days battery backup no lags no prob... morehey are you still using ths phone? is this is good option to buy?

Does genshin impact not lag in this phone?

Gamer, 26 Jul 2021Narzo 30A is called a gaming phone....but it doesn't even support gyroscope....what a sha... moreIs there any other problems for playing pubg in this mobile

If you are a gaming freak or a gaming otaku that use your own allowance to buy things for urself then this is the best budget gaming phone interms of Performance, doesn't support 1080p which is okay like its always performance over graphics so it's good camera is okay which you don't normally use when ur a otaku and all the other features is okay.. This is what to take note if you are a gaming freak

lampp, 08 Jul 2021does this phone support gcam?Try gcam from Nikita 7.4 and tigr 7.4 one both are great u jeed to tweek some settings though

Narzo 30A is called a gaming phone....but it doesn't even support gyroscope....what a shame.... especially we pubg players are facing huge of problems....we all hope to get a fixed gyroscope on the next UI 2.0 update....tq

lampp, 08 Jul 2021does this phone support gcam?yes almost all realme phones support gcam. But since 30A have a Mediatek chipset there aren't many gcam ports.

does this phone support gcam?

kverma, 29 Jun 2021I purchased realme narzo 30a on 30-3-2021 and I am using this phone from day one and I'v... moreDon't know about the first issue, but the 2nd issue is because of google dailer. Since this is a realme phone try to install realme dailer which has proper call recording(videos available on youtube).

I purchased realme narzo 30a on 30-3-2021 and I am using this phone from day one and I've noticed 2 major issues with my phone.
1. I am experiencing glitches while watching videos. i.e. The phone screen starts showing pixelate green screen when we click on a video thumbnail to watch. (I am attaching a screen-recorded video to better explain my situation).
2. The second issue is related to a call recording option. The thing is, we record calls to keep a record of any kind of abuse from the other side or any other useful information provided on the call; but, the built-in software announces that "this call is being recorded" to both parties (to the maker and to receiver) which defeats the purpose of turning it on. And, If we try to install another app from the app store then it only records my own voice but doesn't catches the other persons' voice.

Maybe, there is a problem with the phones' software or the phone screen is faulty, but in either case Please provide me a solution on a priority basis. Please look into this matter, take it as a complaint as well feedback for your system glitches.

Anonymous, 18 Jun 2021this is a beast in this price segment.😎I believe so... I haven't found anything close to it in price and specs, it seems a serious phone despite the lowly price.

It would not be for me but for my old parents this would be cool, especially the fingerprint sensor: finally no more annoying signs to draw on the screen. And they wouldn't even notice the lowly resolution screen...(btw I have an old Samsung with about the same res and even I struggle to notice compared to my S9+).

this is a beast in this price segment.😎

Anonymous, 21 May 2021This phone is good.. But sometimes apps are being closed suddenly. I saw occasional freeze whe... moreGood but low light

my phone is having hanging issue sometimes then screen goes black. when I keep pressing lock or volume buttons only backlight comes on then 5 minutes later it fixes itself when I connect charger.

This phone is good.. But sometimes apps are being closed suddenly. I saw occasional freeze when using chrome. I am not a camera person so I can't comment on that. But Front camera is good. Great battery also.In CPU Z it will show mediatek helio g80 but this phone has g85 of course.

But, Outside visibility is poor. Even in full brightness,I wish It could be better. This is only the major issue I have faced after 15 days of use.

onesujeet, 24 Feb 2021nope, Poco M3 has better specsWell in terms of features yes it has 1080p resolution has the same battery and charging speed has sdm 662 48 megapixels main camera but the realme narzo 30a is kinda focused on performance tho...

Total of 85 user reviews and opinions for Realme Narzo 30A.
ADVERTISEMENTS