The first Realme phone was powered by a Helio P60, but the brand switched over to Snapdragon for the second wave of devices. It seems that it’s planning to switch back as a P60-powered phone was spotted running through Geekbench.

A score from the Realme RMX1833 was published today, the phone ran Android 8.1 Oreo and packed 4GB of RAM. 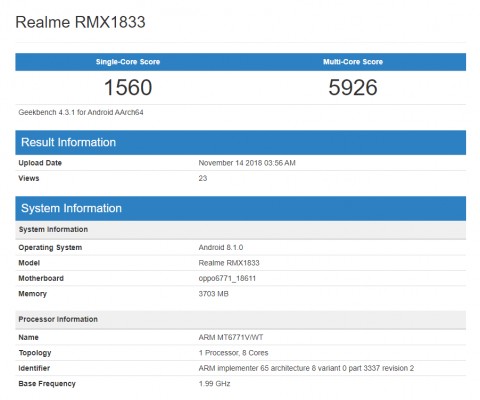 This really is a Helio P60 chipset, so this isn’t the promised P70-powered phone. It appears to be a different revision of the P60, however. The differences between the P60 and P70 aren’t huge anyway, they mostly come down to 100MHz bumps in the clock speeds of the big CPU cluster and the GPU. These benchmark scores also match the original Realme 1, which rules out overclocking. A version for a different market perhaps?

Maybe its a Realme C2, a junior version? Or it could be, that maybe they didn't update processor data as they got a pre-release version of P70? Because the scores are a little bit higher side, right?

Hm, true. Though that just means BBK be making some mad bank