Notched OLED for the masses

As opposed to its predecessor, the Realme X2 comes with a notched Super AMOLED screen featuring a waterdrop-styled notch, 1080 x 2340px resolution making for 19.5:9 aspect ratio. The panel fits in a 6.4-inch diagonal - a small step back from the 6.53" size on the Realme X. 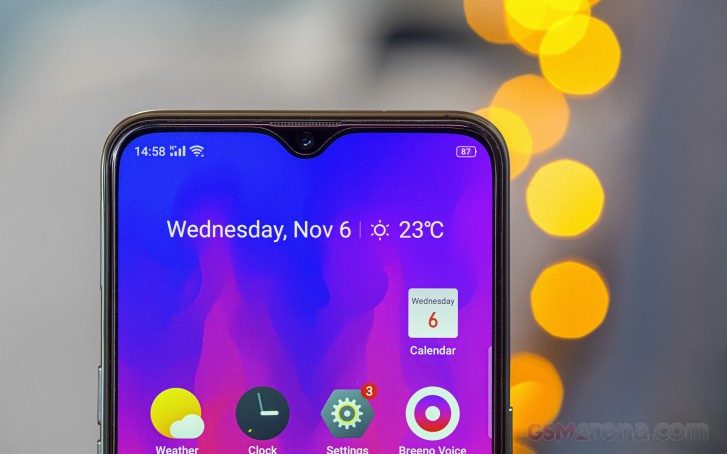 Unfortunately, the screen inherits one issue with pretty much all of Realme's OLED implementations (except for the Realme X2 Pro). We measured a maximum brightness of 432 cd/m2, which might not be enough for comfortable outdoor use if the sun is shining bright. And there's no Max Auto to compensate for that.

But in most cases, 430 nits is still dependable but it's not really competitive.

The good news is that the panel offers exemplary color reproduction. At least with the so-called Gentle mode, that is. You can expect typical blue-ish whites from the default Vivid color mode and largely overblown reds. Greens, blues, and yellows are also a bit off. The final result is average dE2000 of 6.9 and max dE2000 of 14.8. The gentle mode fixes all of the said inconsistencies and produces nearly perfect colors. The average dE2000 is 1.7 and the maximum is 3.3. This means that the panel reproduces colors that are almost indistinguishable from the reference colors with a naked eye.

Having the same battery as the Realme X2 Pro, we expect the vanilla X2 to get more out of the 4,000 mAh unit given that the SoC is more energy-efficient and the screen's refresh rate is 60Hz. The standby score is just about average, but the screen-on tests are what boosted the phone up to a respectable 105h rating, especially the video playback time. 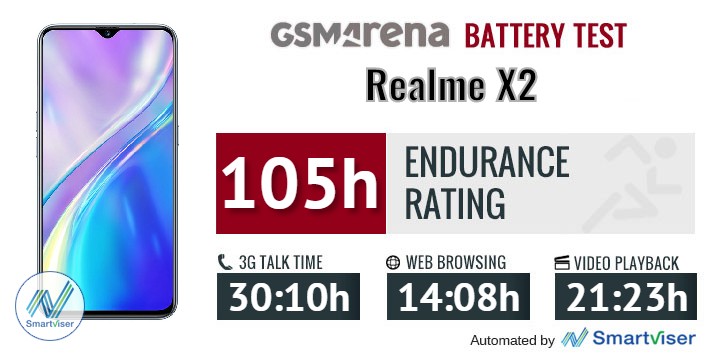 Our battery tests were automated thanks to SmartViser, using its viSerDevice app. The endurance rating above denotes how long a single battery charge will last you if you use the Realme X2 for an hour each of telephony, web browsing, and video playback daily. We've established this usage pattern so that our battery results are comparable across devices in the most common day-to-day tasks. The battery testing procedure is described in detail in case you're interested in the nitty-gritty. You can check out our complete battery test table, where you can see how all of the smartphones we've tested will compare under your own typical use.

But just like the X2 Pro, the X2 also gets a bit warm during charging. It's nothing to be alarmed about, but it may pose some concerns about the longevity of the battery since Li-Ion and Li-Po batteries don't like prolonged exposure to heat.

The phone has a single bottom-firing speaker that's loud enough but not one of the loudest handsets around. On the other hand, the loudspeaker sounds clear enough, so you do get a rather good sound quality that compensates for the lack of loudness.

When hooked up to an active external amplifier in our audio output quality test via the audio jack, the Realme X2 delivered clear output with nice loudness.

Much like most of its stablemates, though, it lost a fair bit of accuracy when headphones came into play. Stereo separation suffered significantly, and some intermodulation distortion crept in, while frequency response got slightly shaky. The volume also dropped to average, so it's a rather mediocre showing in this second test scenario.