As we already pointed out in our design section, the Realme X2 Pro most probably uses the same notched OLED panel as the OnePlus 7T. Diagonal checks out - 6.5", resolution checks out - 1080 x 2400px, aspect ratio checks out - 20:9, maximum refresh rate is 90Hz on both and even the notch and the rounded corners look identical. 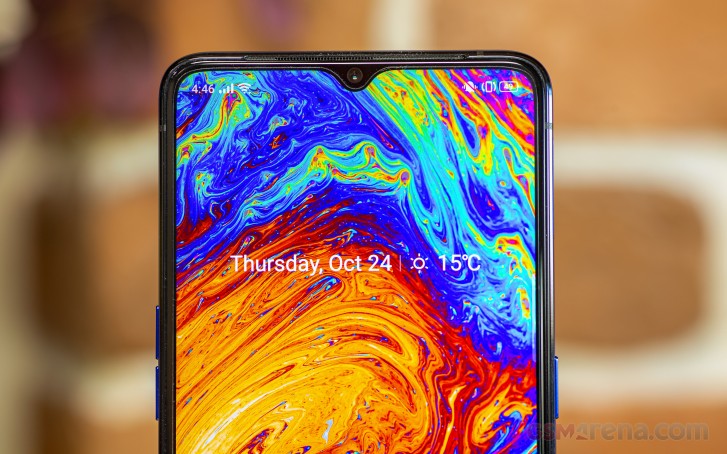 However, the test results in our lab camera a bit different so it must be due to the controller itself. The Realme X2 Pro's screen tends to be a little less bright compared to the 7T - we got 500 nits with the brightness slider set to maximum manually and 708 nits in Max Auto mode. That's really impressive, nonetheless. Perhaps the advertised 1000 nits maximum brightness can be achieved only for a small portion of the screen, which is still a good thing as it supports the HDR10+ standard, and the peak spot brightness will come in handy. Our brightness test is carried overa at 75% fill rate which means the test white pattern takes up 75% of the screen surface.

Color accuracy with the default color mode isn't impressive by any means. We got 5.2 average dE2000 in this mode but when you switch to the so-called Gentle mode, the average dE2000 came down to 3.5. That's a pretty nice result, but the whites remain a bit blue-ish. There's a setting that lets you temper with the color temperature so dragging the slider to warm will fix that, but it will also skew the other colors a little.

Speaking of settings, there's also an option to switch the refresh rate to 60Hz instead of the default 90Hz. You'd probably save on some battery life although, according to our battery tests, it won't be that big of a difference. On the other hand, keeping the 90Hz refresh rate will ensure smooth animations and transitions, which would greatly improve the overall user experience. Once you switch over to 90Hz, you won't be able to go back. Kudos to Realme for bringing this trendy new feature to the masses with its rather affordable flagship.

Also, the software intelligently analyses the content on the screen so when viewing static content or when watching regular videos where you don't benefit from the high refresh rate, the screen will revert to 60Hz to save on battery. After all, you don't need 90 frames per second while reading an article or when watching 30 to 60fps YouTube videos.

Edit: We've received a lot of questions regarding Realme X2 Pro's Netflix Widevine certification, so we checked. The good news is that Widevine L1 support for Full HD video playback is available but it doesn't support the HDR10+ content, at least for now. Maybe it will in the future.

The Realme X2 Pro comes with a 4,000 mAh battery, which has become an industry standard for the last one or two years. In our opinion, this is the bare minimum you'd want in your flagship phone but numbers on the specs sheet aren't everything. Software optimization sometimes makes a big difference and we are glad to see Realme doing a great job at that.

Even in the default 90Hz mode, the Realme X2 Pro scored respectable screen-on runtimes. The standby score could have been a tad better but an overall score of 94h is more than dependable. 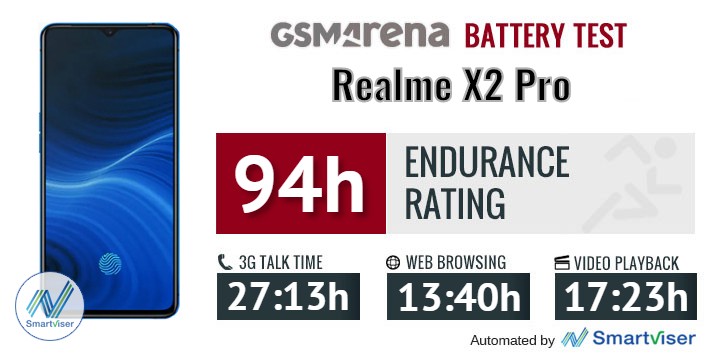 Our battery tests were automated thanks to SmartViser, using its viSerDevice app. The endurance rating above denotes how long a single battery charge will last you if you use the Realme X2 Pro for an hour each of telephony, web browsing, and video playback daily. We've established this usage pattern so that our battery results are comparable across devices in the most common day-to-day tasks. The battery testing procedure is described in detail in case you're interested in the nitty-gritty. You can check out our complete battery test table, where you can see how all of the smartphones we've tested will compare under your own typical use.

And in case the battery life isn't up to your standards although, an overall score of 94 hours is more than respectable, there's an insanely fast charging to make up for that. It's needless to say that you need the original USB-A to USB-C cable and the 50W SuperVOOC-compliant charger to make it work.

To our surprise, Realme's advertised 35 minutes of 0 to 100% turned out to be conservative. Get this, the 4,000 mAh battery charged from flat to 100% in just 30 minutes. Unfortunately, this comes at a price, and that's temperature. We found that the phone gets pretty warm during charging and it raises the question of the battery's health in the long run.

As we all know, Li-Ion and Li-Po batteries don't like heat, and being subjected frequently to increased temperatures, takes away some of their longevity, so you should keep that in mind.

On a more positive note, the handset also supports USB Power Delivery and Quick Charge 4.0+ up to 18W, which is a nice addition to the proprietary charging capabilities. This means that if you have a Power Delivery-compliant charger around you and are in a dire need of topping up, the phone will charge at a respectable 18W rate.

The Realme X2 Pro comes equipped with stereo loudspeakers - one is placed at the bottom and the other one doubles as an earpiece. They are also Doby Atmos-tuned and are one of the loudest ones around. The output volume is downright impressive and the quality isn't bad either. For optimal listening experience, we'd lower the volume by about 3-4 levels below the maximum - it will improve the highs and vocals noticeably while still being plenty loud. The bass could use some work although, we might be a bit too harsh given that these are phone speakers we are talking about. And as we said, the highs start to ring a little when you crank up the volume.

The Realme X2 Pro performance with an external amplifier was exemplary, delivering perfect scores top to bottom and at very high loudness too.

Headphones took their toll on stereo separation and added some intermodulation distortion, plus they dropped the volume to only average. The performance is very similar to the recent Realme phones we've tested, but a step behind its competitors. Then again, it's alright if you think of the X2 Pro as a €399 phone rather than a full-on flagship.