The Realme RMX2121 – a phone that is allegedly the Realme X7 Pro – has done a round of Geekbench testing and the benchmark shows that it’s powered by the MediaTek Dimensity 1000+ chipset.

The company already teased some features of the X7 Pro, things like the 120 Hz OLED display, then it surfaced on TENAA, which filled in most missing details. Except the chipset as that’s not listed in TENAA’s tables. 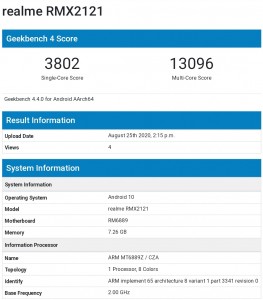 The Dimensity 1000+ supports 1080p+ displays with refresh rates of up to 144 Hz. It’s equipped with four Cortex-A77 cores and four A55 cores, plus a fairly powerful Mali G77 MP9 GPU. And a 5G modem, of course, the defining feature of the Dimensity lineup.

This Realme X7 Pro unit packed 8 GB of RAM, which is the higher spec – base models will come with 6 GB. With processing power covered, here’s a quick overview of the phone: a bright 6.55” OLED display with 1080p+ resolution, 64MP man camera, 8MP secondary, 4,500mAh battery with 65W charging.

The Realme X7 series will launch in India on September 1. The Pro will be joined by a vanilla Realme X7 and there could be others, we’ll find out in a week.

Yes it is more than enough considering it is better than sd 855+ and slightley below 865, I hope it get a global release especially from the official store in my city because it's gonna be very expensive with taxes....

Definitely a good choice on Realme's side. Dimensity 1000+ is a power packed processor and it will make for a good user experience as well.