The Redmi Note 7 is hitting India on February 28, and Xiaomi is doing its best to keep the hype alive for the next ten days. The latest post from Redmi India on Twitter asks fans to look closely into the 48 MP image of the number 7 and find all the humans.

The image is also filled with teasers like a fingerprint scanner behind a display in the top part of the digit, leaving us with the assumption the Redmi Note 7 Pro will indeed come with a UD sensor.

There is also the chance of the phone being launched simply as Redmi Note 7, despite having different specs. We've already seen it happen once - last year with the arrival of Redmi Note 5 and Redmi Note 5 AI Dual Camera. 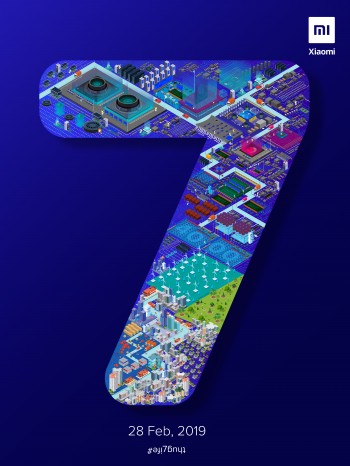 How many easter eggs can you spot?

While it might be just a hint to the fingerprint reader in general, the Redmi India account replied to select tweets, most of them mentioning exactly the Note 7 Pro variant. There are plenty of easter eggs around the 48 MP image, including the battery capacity of 4,000 mAh, the Qualcomm chipset, and the boast that Xiaomi is “India’s No.1 Smartphone Brand”.

The tweet is actually a game in which you must find how many humans are there, and then to reply to Redmi India in the Source link we provided. If you’re lucky, you might even win goodies. While some might think the white Mi beings count as people, look in the lower part of the digit. We’ve already done the count for you; you’re welcome - the number of humans is the number of megapixels on the main camera.

Thanks for the tip, Suvam S!

The SD660 options are numerous today. So Redmi wont release SD660 Note for 17k and including AMOLED & UD Fingerprint. This is just a copy of Oppo k1 then it would fail for them.. They will bring SD660 device in cheaper price. But SD675 is minuscu...

I dont want UD fingerprint. Gimmicks like this only increase the price of a phone