Redmi K20 Pro will have a version with 12GB of RAM, TENAA listing reveals

Xiaomi's sub-brand unveiled its first ever flagship smartphone, the Redmi K20 Pro, just a couple of days ago, and now it looks like it's going to get even more high-end in the future.

Suspend your disbelief for a moment, this is actually possible. See, the official announcement had the K20 Pro topping out at 8GB of RAM, but there is a version with a whopping 12GB of memory coming. This has been revealed today by the official listing of the handset on TENAA, the Chinese regulatory authority that needs to certify every device before it goes on sale in the country. 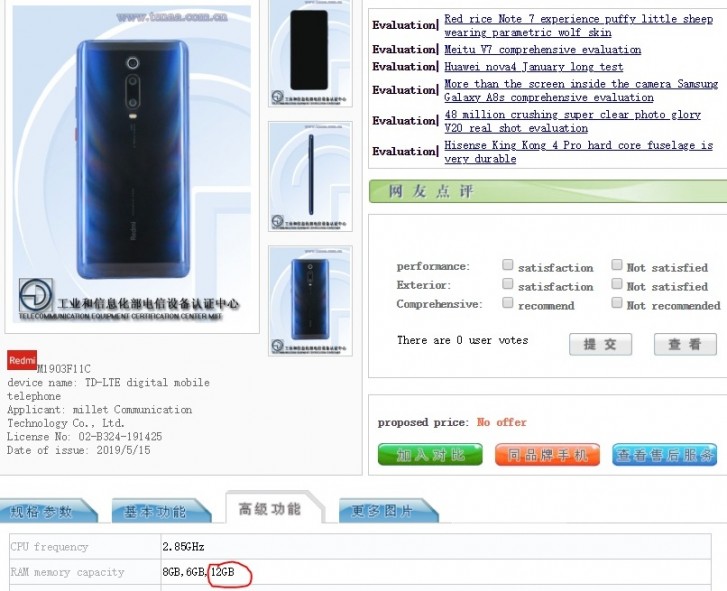 The listing clearly says you will be able to get the phone with 6, 8, or 12GB of RAM. We knew about the first two options already, the third is a surprise, but not a very big one. After all, 12GB variants are all the rage in the flagship killer business - just ask the OnePlus 7 Pro.

We could speculate that Redmi is prepping a transparent edition of the K20 Pro, and that wouldn't be out of the question given Xiaomi's propensity for coming out with those in the past.

The smartphone will probably be offered in other markets as either the Pocophone F2 Pro or the Xiaomi Mi 9T Pro - although the latter could come with a different design, one that's more in line with the Mi 9's looks.

It's really strange, the oficial specifications doesn't have anything related to the FM Radio but the Tenna page says that it has or at least it support FM Radio. Why not enabled it? Perhaps in the Global version as Pocophone F2 with global bands? O...

The funny thing is they have the gut to sell 64gb version without SD slot. Who care how much ram you can fit if the internal storage going to be full in a year. That ram not gonna help data transfer any quicker.